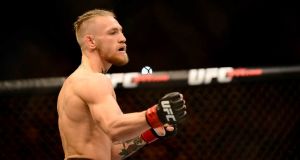 Conor McGregor: unlikely to be troubled by the Irish losses. Photograph: Inpho

New figures show that McGregor Sports and Entertainment Ltd recorded losses of €309,462 in the 12 months to the end of December last.

However, the accumulated losses are unlikely to trouble the Dubliner too much – Forbes estimated that his 2019 earnings are worth around $47 million (€43 million).

In 2018, McGregor earned a $3 million fee for fighting the undefeated UFC Lightweight Champion, Khabib Nurmagomedov in Las Vegas, where he lost by submission. The bout fee didn’t include the monies McGregor received in pay-per-view (PPV) earnings, which are estimated to have helped to push his total fight pay over $30 million.

McGregor Sports and Entertainment Ltd was established in July 2014 to exploit the former plumber’s earning potential and is engaged in the management, promotion and endorsements in the sporting sector.

The new accounts – approved by the company’s directors last Friday – show that the cash pile at McGregor’s firm last year plummeted from €324,438 to €1,761.