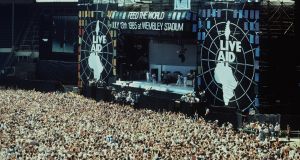 More than 30 years after Live Aid raised about €180 million to help fight famine in Ethiopia, Teneo, the global strategy and communications group, led by Irishman Declan Kelly, has teamed up with not-for-profit group Global Citizen to host another major concert to raise funds to “end extreme poverty and tackle climate change”.

In partnership with music promoter Live Nation and Diversified Production Services, they are planning a “10-hour global media event that will span five continents” on September 26th, 2020, to raise funds for a variety of causes.

Full details for this event have yet to be revealed. However, in a release, the organisers say Global Goal Live will “bring together governments and NGOs, leading artists and entertainers, and CEOs of the world’s largest corporations... in a historic effort to help end extreme poverty, tackle climate change and reduce inequality”.

Global Citizen and Teneo are predicting that this will be the “largest and most viewed cause event in history”. A press conference to announce details of the event will be held on September 26th.

They have also claimed that the year-long initiative will help secure commitments toward the $350 billion in additional funding needed annually to achieve the United Nations Global Goals in the world’s poorest 59 countries.

According to a press release for the event, the campaign is being launched now because the “next 18 months will shape the future of humanity – it’s the last chance to end extreme poverty, tackle climate change and reduce inequality in time to reach the 2030 Global Goals deadline agreed to by all world leaders in 2015”.

Hosted in 1985, Live Aid was a concept devised by Irish singer Bob Geldof and other artists and attracted about 170,000 people to concerts in London and Philadelphia, which were transmitted around the world.

Based in New York, Teneo has offices around the world, including in Dublin. It was co-founded by Mr Kelly, a Tipperary businessman, who is the company’s chairman and chief executive.