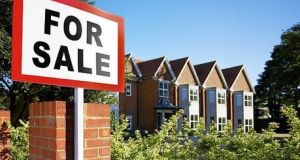 The volume of house sales nationally rose 1.2% to 25,192 over the first six months of the year, although the value of those transactions was down on the same period last year by 0.6% at €7.2bn. Photograph: Getty Images

There was a strong pick-up in house sales in most parts of the Dublin commuter belt in the first half of the year even as the market slowed down in the capital, according to an analysis of official figures by property website Myhome.ie

It attributes the trend to the Central Bank’s mortgage lending rules which are forcing purchasers to look further away from the city for more affordable houses, as well as a timely increase in supply in commuter belt regions.

Myhome, which is owned by the Irish Times DAC, the entity that also publishes this newspaper, has analysed the official figures from the State’s Property Price Register for the first half of the year.

It found that the volume of house sales nationally rose by 1.2 per cent to 25,192 over the six months, although the value of those transactions was down on the same period last year by 0.6 per cent at €7.2 billion.

Cork house sales volumes rose by 9.6 per cent to 2,828, but the aggregate value of those sales rose by less than 1 per cent.

On the downside, the Longford market saw less activity, with volumes down 16.7 per cent, although values held up well, rising 4 per cent.

Volumes in Kerry dipped by 22.8 per cent, although Myhome attributed this to bulk transactions on certain estates being recorded as single deals.

By value, Cork house sales were second largest after the capital, at almost €746 million, with €411 million in Kildare, €307 million in Meath and €276 million Galway.

The county with the lowest level of activity was Monaghan, with just 171 house sales in the first half of 2019.

“The rise in activity in the commuter counties emphasises the relative affordability of good properties in these areas,” said Angela Keegan, managing director of Myhome. “A major boost in new home building in these counties... has been beneficial for first-time buyers.”