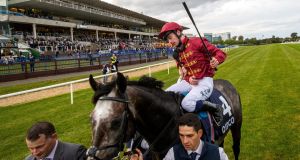 Potentially hundreds of millions of viewers around the world will tune in to the Curragh and Leopardstown racecourses for the first time this weekend for one of Ireland’s premier horseracing festivals.

Leopardstown in Dublin and the Curragh in Co Kildare are staging Irish Champions Weekend, offering participants prize money totalling €2.45 million, for a series of horse races at the highest level.

Japanese racemare Deirdre’s participation in today’s Leopardstown showpiece, the Qipco Irish Champion Stakes at 4.15pm, is likely to result in a financial spin-off for the Dublin track.

The race will be shown live on Japan’s Green Channel, and fans there will be able to bet in it through Japan Racing’s tote pools.

The Japanese racing body will pay Leopardstown a percentage of the betting turnover in return under a commercial agreement.

Along with Japanese fans, viewers in China, Australia, New Zealand, United Arab Emirates, France, eastern Europe, the Caribbean and North and South America can also watch the race, and the rest of the festival.

Broadcasters in those countries and regions will show the Irish racing live, except China’s Hainan TV, which will show it following a short delay.

CNN and Eurosport, which reach almost 500 million homes between them, will feature the weekend on their racing programmes.

Racecourse Media Group, which has the media rights for Irish racing, Horse Racing Ireland and the Curragh and Leopardstown have worked together to generate the international broadcasters’ interest in Irish Champions Weekend.

The two-day festival begins at Leopardstown on Saturday and continues at the Curragh on Sunday, where the feature race is the Comer Group International Irish St Leger.