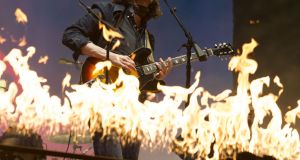 The music label behind artists such as Hozier, Elton John, Taylor Swift and Lady Gaga recorded a 50 per cent slump in profits at its Irish arm last year despite improving revenues.

Recently filed accounts for Universal Music Ireland show profit before tax at the company fell to €1.6 million while sales rose from €15 million to €16.5 million, a boost of almost 10 per cent.

Universal attributed the increasing revenues to the move toward legal streaming platforms such as Spotify and Apple Music by consumers.

“Revenues increased in 2018 compared to the prior year primarily due to the continued positive growth in subscribers to legal music streaming services. The company maintained its leading market share in the Irish music market in 2018,” a note in the directors report said.

Universal, which also represents artists including Kanye West, Jay-Z, Mariah Carey and Adele, employed 19 staff at its Irish arm during the year, up one on the previous year. However, wage and salary costs at the company actually fell in the year from €1.38 million to €1.37 million.

Remuneration for directors Mark Crossingam and Nick Younger also fell, dropping 12 per cent to almost €530,000 between the pair.

Universal Music Ireland now derives the bulk of its sales from royalties and licence fees (€13.2 million) rather than the sale of goods (€3.35 million), a significant turnaround from 2015 when the sale of CDs made up about 47 per cent of revenue.

While the company paid an interim dividend of €2 million during the year, with cash at hand and in the bank of €137,756 by the end of the year, the directors didn’t recommend the payment of a final dividend.