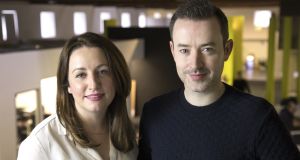 The JOE.ie family of websites is to drop the “ie” suffix from its brands as owner Maximum Media repositions itself as a broadcast company.

Maximum, which publishes the JOE.ie, Her.ie, HerFamily.ie and SportsJOE.ie sites, has constructed a small broadcast studio in its Dublin headquarters and hired experienced producers and designers under a new strategy.

Paddy McKenna, editor of JOE.ie, has been promoted to broadcast director as part of the change, which involves “a significant investment”.

The profitable company, which has been in continuous growth since it launched in 2010, said it expects to earn €6 million in revenue in the year to the end of April 2017, a 40 per cent year-on-year increase.

“Our ambition is to become a top-tier media brand,” said chief executive Katie Molony. “The business is moving away from being a website publisher and will become a distributed media network, and also a television network.”

Although the company will retain its websites, and they will remain at their existing web addresses, it no longer sees itself as “a traditional website company”. It will concentrate instead on building the popularity of its video and audio content through social channels, the most important of which is Facebook.

Her, which courts a female audience, attracted 235,000 views for its Facebook Live streaming of September’s March for Choice in Dublin.

Its first Facebook Live series will be called Badly Behaved Women, while HerFamily will launch The Motherload, a panel show in which comedian Sharyn Hayden and guests have “honest and open conversations” about parenting issues.

Other video-on-demand content will include The Fitness Factory, featuring ex-Irish rugby international Jerry Flannery, a minority shareholder in Maximum Media, and Clean, a Her series on nutrition and so-called “clean eating”, while Her Look will capitalise on the popularity of online make-up tutorials but feature “Irish talent in an Irish setting”.

“JOE is a megaphone, but a lot of the time, the megaphone is handed over to our users. At the heart of it is fun and entertainment and information,” he said.

The company only recently dipped its toe in podcasting and plans to step up its “appointment listening” audio content. “Podcasting is an incredibly intimate experience. It has to be like a woolly jumper close to your skin,” he said.

The Maximum Media move comes as the balance of online traffic and revenues shifts away from desktop towards mobile, while traditional broadcasters are suffering in the wake of intensified competition from social media for the eyes and ears of younger viewers. The new media axiom is that “the future of mobile is video, and the future of video is mobile”.

In its current financial year, earnings before interest, tax and other items are forecasted to be in the region of €1 million, it said.

The company, which counts Virgin Media and AIB among its existing commercial partners, is in talks with several sponsors in relation to its Facebook Live and video-on-demand plans and will hold a launch event aimed at the advertising community in Dublin on Tuesday.

Ms Molony said creating “branded entertainment” opportunities would allow both the company and advertisers to better plan their spending on digital media marketing. “It’s not about the last-minute placement of an ad,” she said.