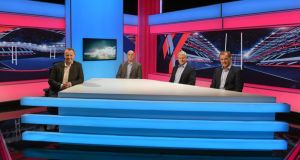 TV3 viewed its broadcasting of the Rugby World Cup in 2015 as “a brand-defining event”. Photograph: Sportsfile

Losses at TV3 deepened to almost €17 million in 2015, the year in which the broadcaster was acquired by cable group Virgin Media.

Turnover at the group, which consists mostly of advertising revenue, fell 16 per cent to €39 million, as it battled against new competition in the shape of UTV Ireland, accounts just filed to the Companies Office show.

After recording a pretax loss of €7.7 million in 2014 on turnover of €46.6 million, TV3 was further challenged in 2015 by the launch of UTV Ireland. The channel’s former owners snatched the Republic of Ireland rights to ITV-distributed programming, such as soaps Coronation Street and Emmerdale, away from TV3, denting its share of peak-time audiences.

Virgin Media, which completed its deal to buy TV3 last December, has since acquired UTV Ireland and taken over its programming supply contract with ITV.

Following regulatory and government approval for this deal, the British soap operas will be moving back to the TV3 schedule next week. The broadcaster is also set to benefit from ITV’s decision to add a sixth weekly episode of Coronation Street from late 2017.

While the absence of the two soap operas hurt TV3’s advertising revenue, this would have been partially mitigated by the cost savings from not having to pay for the ITV content.

It clawed back some advertising cash from its broadcasting of the Rugby World Cup in the autumn, having targeted about €6 million in ad revenue from the event. But it would have had to pay more than this sum for the rights to show the tournament, which it described at the time as a loss leader and “more of a brand-defining event”.

TV3’s parent vehicle, Tullamore Beta Limited, had net liabilities of €53.2 million as of the end of 2015, when it was acquired by Virgin. As part of the acquisition, the company’s external working capital facility was repaid in full and terminated with the lender.

In the directors’ report accompanying the accounts, TV3 said the advertising market had shown some growth in 2014 and 2015 after a significant contraction during the recession, and that modest growth was expected for 2016.

Competition in the market had increased, however. As well as the UTV Ireland launch, Sky and Channel 4 added to the range of channels on which they sell “opt-out” advertising spots in the Republic.

TV3 Group, which also owns the 3e channel, said it continued to grow other revenue streams through TV3.ie, its on-demand service 3Player and through the sale of content internationally.

Red Rock, its own soap opera, secured two international distribution deals, the first to the Amazon Prime Video service in the US and the second to the BBC. The first 80 episodes aired in a BBC One lunchtime slot last summer, and the BBC has acquired the next 80 episodes to show in 2017.

This makes Red Rock one of the most successful exports in Irish broadcasting history, although the soap opera’s ratings in Ireland have dropped of late and it is currently on a mid-season break.

Through a partnership with Virgin Media parent Liberty Global, TV3 is developing technology for an “addressable advertising” platform, which will allow advertisers to target specific customers based on their geographic location within Ireland, or perhaps according to their particular demographic. This is expected to contribute revenue from 2017, the directors said.

After the tricky 2015, TV3 is now in much stronger financial position under its new ownership and has signalled its intention to compete more strenuously with RTÉ.

The group is yet to outline its future plans for UTV Ireland, but it is anticipated that it will both rebrand the channel and cut jobs. As of the end of 2015, TV3 Group employed 261 people, down from 274 a year earlier.