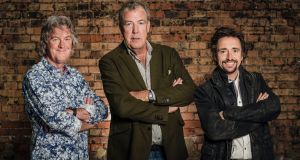 What’s the difference between Amazon, founded by a libertarian American with an ambition to make it the world’s most customer-centric company, and the BBC, a public organisation driven in its early decades by a moralistic mission to “inform, educate and entertain” the people?

According to Jeremy Clarkson, it is this: “When you send Amazon a film, their television people in Los Angeles, they ring up and squeak with joy. What you never get at the BBC is that, ever,” he told the, um, BBC, which very kindly interviewed him as he began the publicity push for Amazon’s The Grand Tour.

What’s the difference, for that matter, between Netflix and the BBC? Over to Peter Morgan, writer of The Crown. “Normally, I’m greeted with a heavy-hearted sigh,” he told the Radio Times. But when he pressed the flesh with Netflix, he found he had “walked into a room with an idea that dovetailed perfectly with a company’s strategy”. For the first time in his life, he was “in sync with a corporation’s avarice”.

The weary caution of a BBC in cutback mode is not the only link here: Amazon and Netflix both have pots of money to spend on original content and haven’t yet settled on how they want to spend it. Programme-makers with expensive ideas to pitch, accustomed to the answer being no before they even get in the room, think of the new generation of television streaming companies as Santa Claus-like figures with good reason.

But what about Amazon? Even after it made headlines by snapping up Clarkson and his former Top Gear accessories for a new car-themed show, it has felt safe to leave the Amazon Prime streaming service out of the local media conversation, for the simple reason that it is not available in the Republic of Ireland.

That is set to change very soon: Amazon Prime, currently only available in certain territories, is going global as early as next month in a bid to usurp Netflix from its dominant position in internet television.

Fans of Clarkson’s individual style of informing, educating and entertaining will be happy, as will anyone who has read lots about how great Amazon Prime dramas like Transparent, The Man in the High Castle and Mozart in the Jungle are, and would be happy to pay to watch them. But, given the piracy option persists, how many people might that be?

The player with first-mover advantage has done well for itself. Netflix is estimated to have more than 300,000 household subscribers in Ireland, although that is not an official company figure.

Netflix itself will not give a breakdown of its subscriber numbers, although its last quarterly financial update showed that growth in its “international subscribers” (non-US customers) is going gangbusters. Yes, a lot of people fancied watching Stranger Things.

Amazon Prime has about 1.6 million subscribers to its video service in the UK, according to the survey by television ratings body Barb, which obviously points to a strong hand for Netflix and suggests it could amass 100,000 subscribers here.

Before it became the big spender on original content that it is today, Netflix had one thing nailed: its pricing structure. There weren’t too many news publishers out there asking consumers to pay a monthly subscription for their content when Netflix came along and wooed them with their €6.99 fee (now €9.99/$9.99). Among a younger demographic who grew up online, the Netflix model helped advance the concept of ponying up on a regular basis to a single content provider.

After turning, briefly, into a Wall Street profit machine, Amazon is now back to its big-spender ways, investing in a new generation of warehouses for its bread-and-butter e-commerce operations and doing whatever it can to turn the skies black with drones.

Its other new outlay is to crank out more and more original productions in a bid to unseat Netflix from its throne. More television spaghetti is coming, and some of it will be sticking against the wall very nicely. Some of it may even be proper steak.