Soaps back at TV3 as head of news and programming departs

Andrew Hanlon, who launched many of broadcaster’s top shows, to leave at year’s end 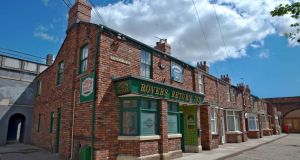 ‘Coronation Street’ is returning to TV3 next month

Andrew Hanlon, the man responsible for launching many of TV3’s most successful home-grown shows, is to leave the broadcaster at the end of the year.

Mr Hanlon, who has been director of news and information programming since TV3 commenced broadcasting in 1998, was behind the launch of TV3 News, Ireland AM, Xposé and the Tonight with Vincent Browne show.

“Andrew was a loyal, dedicated and, above all, supremely talented colleague who I have no doubt will continue to leave his mark on the Irish media landscape,” said Mr Kiely.

TV3 also announced the return of soap operas Coronation Street and Emmerdale to the channel from next month.

The soaps will be broadcast simultaneously on TV3 and UTV Ireland initially before being shown exclusively on TV3 from December 5th.

The move follows Virgin Media’s announcement earlier this week that it had received regulatory and competition approval to acquire UTV Ireland.