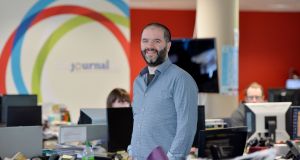 Journal Media Limited, the company behind news app TheJournal.ie, made a loss of €574,000 in 2015, accounts filed to the Companies Office show.

The digital publishing group, set up by brothers Eamonn and Brian Fallon, has a deficit of €4.7 million on its balance sheet, the abridged accounts show. In the previous year, it recorded a loss of €846,000.

The Fallon brothers, who founded property portal Daft.ie in 1997, have continued to invest in the six-year-old TheJournal.ie and its offshoots, expanding its workforce. The company launched a new business site, Fora, in March of this year.

TheJournal.ie, edited by Susan Daly, was set up in 2010 to appeal to a younger audience keen on consuming news on their smartphones, which were then relatively new to the market.

The publisher adopted a “mobile-first” strategy in 2012, prioritising its apps above its desktop website. It is free to its readers, earning revenue from native advertising, the term given to online advertorial or sponsored content.