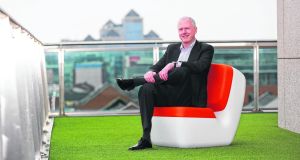 Core Media chief executive Alan Cox: “We have all revised our growth figures down vis-a-vis the beginning of the year”

Print, radio and television advertising revenues for 2016 will be sharply below what was forecast at the start of the year, with the Irish print market on track to suffer a double-digit decline, media agencies say.

The impact of Brexit-related economic uncertainty and the accelerating shift of advertisers’ money to digital has hammered traditional media, with poor trading in the autumn sealing a “tough” year for the industry.

Core Media, the largest buyer of advertising in Ireland, now expects advertising revenues in the “struggling” print market to plummet 12 per cent in 2016, while radio revenues are estimated to finish 5 per cent lower.

At the start of the year, it was anticipated that radio revenues would rise 5 per cent and print advertising would be flat.

In money terms, print advertising revenues for 2016 are now forecast to come in about €16 million lower than they were in 2015 and what was originally expected for this year. The radio market will contract by €6 million and will come in about €11.5 million lower than the start-of-year projections, according to the latest market forecasts from Core.

“We have all revised our growth figures down vis-a-vis the beginning of the year,” said Core Media chief executive Alan Cox.

Over the year, there was a “tipping point” in radio, said Mr Cox, who has been a critic of Irish radio for some time.

“There is a lack of innovation in the radio sector and it is losing money to digital because of it,” he said. “It is important that they do something demonstrable in their content. Some stations have, but the majority haven’t.”

Although print is the hardest hit medium, Mr Cox praised the newspaper industry for “starting to fight back” with “positive messages” about the effectiveness of print advertising. “It won’t reverse the decline, but it will slow down the decline,” he said.

Core expects the value of print advertising to fall a further 8 per cent in 2017.

Television revenues have still grown in 2016, but by about 3.6 per cent rather than the start-of-year forecast of 7 per cent. Core estimates the market will be some €8 million higher than in 2015, but almost €8 million lower than what had been hoped.

Britain’s unexpected Leave vote in its June referendum on membership of the European Union, and the subsequent weakening of sterling, prompted the big television advertisers that decide their Irish marketing budgets out of London to cut their spending.

Carat Ireland, another agency that buys advertising for clients, now expects the television market will only grow by about 1 per cent in 2016, while it forecasts a 4-5 per cent drop for radio and a 15 per cent decline for print.

“The first half of the year was quite strong, but the second half was more disappointing than we had hoped,” said Carat Ireland chief executive Ciarán Cunningham.

“Print in particular is in the eye of the storm of the digital economy, as the migration of revenues to digital continues,” he said.

Out-of-home advertising is on track to rise 7 per cent, according to Core. But the real star performer is once again digital, with a “prudent” estimate from Core suggesting revenues will rise 18 per cent.

At the start of 2016, the advertising market in the Republic had been tipped by several forecasters to swell 9-10 per cent. Core now expects growth to come in at just 3.8 per cent, while excluding digital, the market will likely have shrunk 2 per cent.