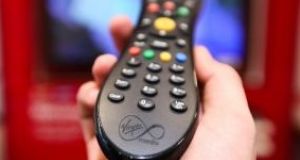 Virgin Media Ireland fell into the red in 2015, recording a €3.87 million pre-tax loss as against a €26 million profit a year earlier as customer numbers fell.

The company, which has invested heavily in its network in recent years, reported earnings before interest, tax, depreciation and amortisation (ebitda) fell 22 per cent to €122 million, compared to €153 million in 2014.

Revenues totalled €350 million versus €351 million in the previous year.

A breakdown of turnover shows the company recorded €284 million in sales from analogue, digital television and broadband services with a further €65.8 million coming from telephony services.

Virgin attributed the drop in subscribers to the phasing out of its MMDS (Multichannel Multipoint Distribution System)platform, which was used by customers in rural areas who could not access the company’s cable network.

Recent figures from the company show the number of customers has declined further this year however, falling to 457,700 in the third quarter. These include 363,800 broadband subscribers, 312,200 television subscribers and 352,200 home phone customers.

Owned by Liberty Global, the group claims to have invested over €1 billion in Ireland over the past decade.

Virgin, which rebranded from UPC Ireland last October, recently announced it is putting its prices up in January for the second time in less than a year for many of its subscribers.