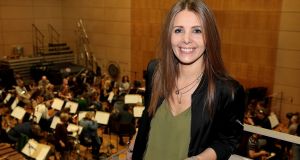 Jenny Greene, who left 2fm in March, will return to the station with a new 3pm show from June.

RTÉ 2fm will “become more of a speech service” in a repositioning of the station, led by Jennifer Zamparelli’s new 9am morning show, which will “evolve” into a caller phone-in programme aimed at younger listeners.

Jenny Greene, who left 2fm in March after being offered an evening slot when her show with Westlife singer Nicky Byrne came to an end, is back with a new 3pm show in the new line-up, RTÉ announced.

Doireann Garrihy has been confirmed as the co-presenter of a new 2fm breakfast show, alongside the station’s current drivetime presenter Eoghan McDermott.

It is hoped that Garrihy (26), who has a strong social media following, will bring in more of the younger listeners that 2fm has been trying to reach.

Music-focused presenter Tracy Clifford, a former Spin breakfast host who has grown her audience by 14 per cent over the past year, will see her three-hour slot move one hour earlier to midday in the re-jig.

Evening time slots have not yet been finalised, but are understood to include a wider cast of presenters, including podcast talent eyed by 2fm.

Dan Healy, the head of 2fm, said the station wanted to attract “people who don’t listen to FM radio, but love listening to audio”.

The radio industry has struggled to attract younger listeners, especially after about 4pm in the day, he admitted, and this had prompted a rethink at 2fm about how it should approach its mission.

“A station like ours should continue to evolve,” he said.

She will be given time to “get used to being in the studio on her own”, but by autumn her 9am-noon show will play less music. It will instead feature “relevant stories”, inspired by the news headlines and the “real issues” people talk about.

“Over 12-14 weeks, Jen will emerge as a speech broadcaster,” Mr Healy said. “There’s a humour to Jen and there’s an edge to Jen,” he added.

The new 6am-9am breakfast show with Garrihy and McDermott will be “high-energy”, rather than the talky style of McDermott’s drivetime show.

“We’ve been looking at Doireann for a couple of years. She brings something completely different.”

Greene said in March she was leaving 2fm “with a very heavy heart” after Byrne’s decision to quit ahead of the Westlife reunion tour brought an end to their mid-morning show.

Mr Healy said Greene, a DJ who works on high-profile live events for RTÉ with the RTÉ Concert Orchestra, “had become a household name pretty quickly” and was somebody that “everybody in RTÉ admired”.

“The chemistry was good between Jenny and RTÉ and Jenny and the station,” he said.