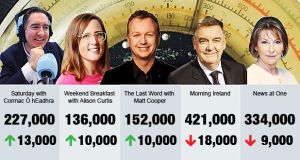 Weekend presenter Finucane took the listenership for her more popular Saturday morning show to 382,000, up 18,000 since the last survey and 58,000 higher year-on-year.

This brings the programme back to an audience level last recorded two years ago. Finucane’s Saturday show has also regained its position as the second most-listened to programme on Irish radio, having conceded that spot to Liveline two years ago.

The Last Word with Matt Cooper added 10,000 listeners since the last survey, taking his drivetime audience to 152,000, up 14,000 year-on-year in a competitive time slot. This is a four-year high for the show.

Radio 1 breakfast programme Morning Ireland lost ground, slipping 18,000 listeners since the last survey to an audience of 421,000, a figure that is down 10,000 over the year.

It remains the most listened to programme on Irish radio, ahead of Finucane’s Saturday show and Joe Duffy’s Liveline, which has an audience of 375,000. The afternoon phone-in programme lost 6,000 listeners since the last survey, but still has 5,000 more than it did a year ago.

Weekend audiences recorded by the JNLR are typically more volatile than weekday ones, though Radio 1 managing editor Peter Woods said he hoped Finucane would be able to sustain her listenership in future surveys.

Newstalk lost listeners across its weekday schedule, with the exception of Sean Moncrieff who held steady in the afternoon at 97,000, and Ivan Yates, whose gain of 3,000 listeners took his audience to 173,000 at drivetime, a slot that he has grown steadily since he took it over almost two years ago.

Overall, there were few major audience moves among national radio station shows in the survey, for which some 16,900 people were interviewed about their radio habits over the period April 2018 to the end of March 2019.

On RTÉ 2fm, which is about to embark on a fresh schedule shake-up and repositioning of the station, the final 12-months listenership figure for mid-morning show Nicky Byrne with Jenny Greene was 155,000.

This was up 2,000 since the last survey and 7,000 year-on-year and was also the show’s highest audience in more than three years.

However, singer Byrne’s decision to leave 2fm ahead of the Westlife reunion has brought an end to the show.

Greene announced she was departing the station rather than go back to presenting in an evening slot, but 2fm has since decided that she will host a 3pm show as part of the new weekday line-up.

2fm’s Breakfast Republic, which has an audience of 188,000, will be replaced with a new breakfast show presented by Doireann Garrihy and Eoghan McDermott, who will move from drivetime.

Breakfast co-presenter Jennifer Zamparelli, a regular face on RTÉ Television, will begin her new show on June 10th at 9am. The programme is expected to evolve into a phone-in show as part of 2fm’s bid to “become more of a speech service”, said head of 2fm Dan Healy.

Music-focused early afternoon presenter Tracy Clifford, who has grown her audience from 129,000 to 147,000 over the past year, will start her show one hour earlier at 12pm in the 2fm re-jig.

On Communicorp-owned Today FM, breakfast presenter Ian Dempsey added 1,000 listeners in this survey, but his listenership of 181,000 is up 18,000 year-on-year.

“Breakfast and drive are the bedrock of any great radio station, so I’m delighted to see Ian and Matt continue to drive massive audience numbers,” said Keith McCormack, chief executive of Today FM.

Choose Radio, a cross-industry group that represents the industry to advertisers, said Ipsos MRBI’s research showed radio continued to be the audio medium of choice with an 85.5 per cent share of the Irish audio market, compared with 8.1 per cent for own music, 4.9 per cent for Spotify and 1.6 per cent for podcasts.

*Changes shown are compared to the last survey, which covered the 12 months of 2018.