For most journalists, the idea of having their day’s work filmed is a very dull nightmare 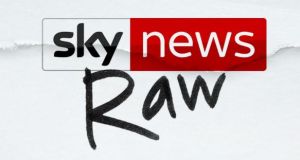 "Luckily, Sky News is almost certainly a more intriguing place to work than Sky News Raw could ever dare to show."

Watching the feed for Sky News Raw, the behind-the-scenes channel that surfaced last week for one day only, I remembered that the problem with being promised “unique access” to the goings-on of another newsroom is that I’m mostly just interested in the décor.

And so it proved that the things people said out loud in full knowledge that they were being live-streamed were inevitably of less note than the fact that the editorial meetings were held in what Sky News calls the “ocean room”, where the walls were adorned with words like “innovation” and “success” – lest any employee forget to be innovative and successful – plus some nice pictures of colourful fish.

Then there were the couches. Other people’s newsrooms always have lots of couches. Forget the seat at the head of the table – in the media, the big power position is a full recline in the centre of a long and crowded sofa.

“Rather them than us” was the standard industry response to Sky News’s announcement that it intended to place 44 cameras around its newsroom and wait for television gold. Only the oddest and most egocentric of journalists are naturally confident that a “raw” feed of their typical day in the office would make suitable material for a corporate marketing project.

Why was Sky News Raw happening? I’d like to think of it as part of the rising “slow TV” trend, in which gently soporific television content is commissioned on purpose in a bid to help audiences forget the anxieties of the modern world.

Officially, the rolling news channel had decided to mark its 30th birthday by showing how it works “in a very transparent manner”, just in case anyone had mistaken it for one of those nasty “fake news” outlets corrupting the media landscape.

Broadcast news hangs on endless logistics, which on this occasion includes figuring out the precise whereabouts and availability of Simon Coveney

Several newspapers have done it at least once. In 2012, The Irish Times opened up its newsroom, including a packed editorial conference, to cameras from Tonight with Vincent Browne, which some might say was braver than a live stream.

Mostly, however, it is the increased technical ease of live-streaming, plus the conviction that the media should be more participatory, that is driving the trend. The theory is straightforward. By showing how the sausage is made, more people will hopefully trust the sausage. It’s not the normal outcome of a tour of the sausage factory, but the person with the grand plan tends to forget this.

“The editor asks you to read your list, and then stares at you as if you had just projectile vomited on to his new Damien Hirst,” is how former London Independent journalist Christina Patterson describes a newspaper conference in her book The Art of Not Falling Apart.

“If he’s in a bad mood… he will pick out something on your list, and repeat the words back to you as if you had just suggested a front-page story on Jane Austen’s use of the quadrille. He will then ask you about a tiny news item on page 36 of the one paper you didn’t get a chance to skim.”

Pretty soon into Sky’s 7.30am meeting it is apparent that no one is going to propose a report on Jane Austen’s use of the quadrille. Nothing that strange will happen. Broadcast news hangs on endless logistics, which on this occasion includes figuring out the precise whereabouts and availability of Simon Coveney. Brexit looms large. “We’ll dig out the backstop explainer we have got,” says a woman standing in the shadows.

To be fair, our guide, Sky’s Niall Paterson, has done his best to manage expectations. “All of us will be applying a bit of a filter to the general banter that goes on in a newsroom,” he warns. “Newsrooms can be quite boisterous places. People might not be quite as bolshy or as sweary as they usually are.”

No one will have come away from Sky News Raw mistaking its employees for the kind of psychopaths that enliven the second-best film ever made about broadcast news (Network). Neither is anyone as hilariously jaded as Bill Murray in the best one (Groundhog Day). Few journalism students stumbling across it would come away with the impression that Sky News was a workplace that was out of reach to them. Why they might want to send in their CVs for the privilege of attending endless meetings was less clear.

Luckily, Sky News is almost certainly a more intriguing place to work than Sky News Raw could ever dare to show. As not all leads (aka rumours or hearsay) turn out to be genuine, verified stories, real-time discussion of them simply has to stay confidential. The sausage must arrive fully formed or not at all.

Indeed, the main message to be gleaned from Sky’s best-behaviour theatre is that there are limits to journalistic transparency. Oh, and if you do dress up purely for the cameras, a piss-taking colleague will be sure to point it out.