Is it time for RTÉ to sub-license more sport?

Rival TV3 would like big tournaments to be ‘split down the middle’, BBC and ITV-style 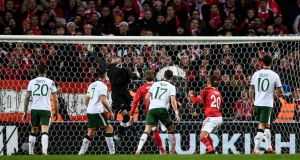 The second leg of the Republic of Ireland’s World Cup play-off against Denmark on Tuesday is bound to attract a massive audience to RTÉ2. Logic would suggest that it will pull in more viewers than Ireland’s final group qualifier against Wales, which had an average audience of 861,200, and the first leg, which drew an average of 848,000 on Saturday night, though the 1,137,500 who tuned in for the All-Ireland football final may not be beatable.

The Dublin-Mayo clash currently holds the status of most-watched television programme so far this year, with the hurling final in second place with a 901,500 average, and though the traditional year-topper is The Late Late Toy Show, the pattern is clear: for big audiences, sport is a broadcaster’s most reliable friend.

RTÉ no longer has this pitch to itself. Rugby, in particular, has developed a habit of slipping through its grasp, most notably in the case of the Six Nations, which will air on TV3 for the next four years after RTÉ was priced out of the bidding.

It is two years, meanwhile, since The Irish Times first reported a landmark moment for RTÉ: its admission that it couldn’t afford to hang on to all of its rights to the Euro 2016 tournament.

In an unprecedented move, RTÉ, having paid for the Irish rights, held talks with other broadcasters about sharing the coverage. TV3, keen to “take on the burden” of the tournament, later emerged from the auction with the exclusive rights to 21 matches (none of which involved Ireland) and shared rights to the final (which, surprise, surprise also did not involve Ireland).

But despite its Six Nations victory, its earlier 2015 Rugby World Cup win and this Euro 2016 sub-licensing, TV3 Group believes RTÉ Sport’s losses are a narrative that has been overplayed.

“Sport rights are a bit of a red herring. RTÉ still enjoys well over 80 per cent of the live terrestrial sport,” TV3 Group managing director Pat Kiely said in August – a point echoed last week by his boss, Virgin Media Ireland chief executive Tony Hanway in an interview with The Irish Times.

Virgin-owned TV3 believes there is “something wrong” with a situation whereby RTÉ can record six deficits in eight years and yet continue to dominate broadcasting sports rights – sometimes even holding rights to more sport than it can show live in one day. For Kiely, an RTÉ press release “proudly boasting” that it had 20 of the top 20 shows last year was especially galling, as six of the top 10 shows were Euro 2016 matches.

As Kiely also explained to the Oireachtas communications committee last month, the “promise” suggested by RTÉ’s Euro 2016 sub-licensing soon turned to disappointment. “We thought it was the beginning, but unfortunately it was not a great experience in the end, because the games RTÉ sub-licensed were typically the smaller, less popular games.”

To both The Irish Times and the Oireachtas committee, the “up for partnering” TV3 has been clear: if RTÉ did not know it had the option of running up a deficit, it would have been obliged to sell off more rights. But if RTÉ had “split the tournament down the middle”, as the BBC and ITV typically do, its deficit in 2016 might well have been smaller, while TV3 would have made some forays into that top 20 most-watched shows list.

RTÉ has the rights to next year’s World Cup in Russia, the Euro 2020 finals, the 2022 World Cup that is allegedly going to take place in Qatar, and the Republic of Ireland’s qualifying matches for both the 2020 and 2022 Fifa tournaments.

Perhaps one or more of these will become subject to sub-licensing – or even wind up being split down the middle, BBC and ITV-style – if RTÉ comes under pressure again to balance its books.

It is hard to see how RTÉ is not under this pressure at the moment, notwithstanding the €107.5 million sale price on the near nine acres of land that it sold off at Montrose this summer.

Sports rights are expensive and recouping part of the cost through smart sub-licensing to a hungry rival is a fix of sorts. But it is not the perfect solution, which is why RTÉ will see it as a last resort, especially if Ireland qualifies, and especially in 2018 when it is already missing the Six Nations.

Big sporting events are often loss-leaders for free-to-air broadcasters. It shouldn’t be easy for an organisation in cloth-cutting mode to be an aggressive bidder or to dominate the market.

What sport delivers, however, means high-level tournaments remain a covetable prize. Broadcasters talk glowingly of the halo effect from having an audience magnet such as national team sport on their schedules, in part because beyond sport such audience magnets are now harder to come by.

For RTÉ, more enthusiastic sub-licensing auctions and indeed future joint bids for tournaments may feel like conceding an own goal. For its rivals, they will seem like long-awaited opportunities to break out of their own box.

1 State subsidises public sector retirees to cover gap until State pension
2 Who are Ireland’s 17 billionaires?
3 My father in a nursing home wants to gift me his house
4 Trump holds America up as ‘example for the world’
5 Countries that fail to attract immigrants will lose out – Microsoft chief
6 Are there annual limits on inheritances or gifts to a child?
7 Nama lends Cosgraves €15m to fund huge apartment development
8 Cubic Telecom raises more than €11 million in funding
9 Q&A: Why has the pension age question suddenly become an election issue?
10 BP pulls out of Iraq’s giant Kirkuk oil field as plans stall
Real news has value SUBSCRIBE