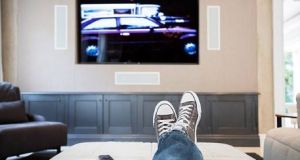 Minister for Communications Denis Naughten ruled out an increase in the TV licence earlier this year. RTÉ director general Dee Forbes previously said the price should increase from €160 to €175 and that the fee was in need of reform and modernisation. File photograph: Getty Images

The secretary-general of the Department of Communications has said the TV licence model is does not work and that he’s not sure the problem can be solved.

Mark Griffin told the Public Accounts Committee (PAC) on Thursday that the level of TV licence evasion is 14.6 per cent. “If I was being brutally honest I would say the TV licence model is broken, I’m not sure whether it can be fixed,” Mr Griffin said.

Fianna Fáil TD Shane Cassells asked the secretary-general if he shared concerns regarding the pressures the national broadcaster is facing.

“I unequivocally share your concerns in this particular area. When you see the reduction in TV licensing income, the reduction in commercial revenues that RTÉ have lost in the last number of years…It is having a real direct effect,” Mr Griffin said.

The broadcaster’s inability to invest in independent production is “affecting the quality of what you’re seeing on RTÉ”, he added. “We in the Department have a real concern about the future funding of the company,” he said.

Minister for Communications Denis Naughten ruled out an increase in the TV licence earlier this year. RTÉ director general Dee Forbes previously said the price should increase from €160 to €175 and that the fee was in need of reform and modernisation.

Mr Naughten has asked the Joint Oireachtas Committee to look at the funding of public sector broadcasting over the last number of months with a report due in the coming weeks.

The committee heard the Department granted €179 million in licence fee funding to RTÉ last year, around 40 per cent of its total expenditure for 2016 (€439 million).

Mr Griffin came under criticism from members of the committee as there was no breakdown as to how the money was spent by the broadcaster, and for not knowing whether there is a service level agreement with RTÉ. Fianna Fáil TD and chairman of the PAC Sean Fleming said “that is shocking”.

“We see a cheque for €179 million going out and we haven’t seen any audit trail as to how it was spent,” the Laois-Offaly TD said.

Sinn Féin TD David Cullinane inquired as to whether RTÉ could come before the PAC. The Department’s total expenditure in the broadcasting area amounted to €240 million.

Six major multinational firms are to be asked to appear before the PAC next year. Mr Fleming said the committee would write to Apple, Google, Citibank, JP Morgan, GSK and Pfizer to “voluntarily appear” following the release of the Paradise Papers.

“I think it is important for the Public Accounts Committee and the public at large to hear from the other side of the equation, the multinational sector, and their understanding of how corporation tax works in Ireland,” Mr Fleming said.