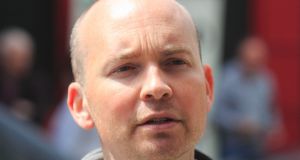 Paul Murphy: Solidarity TD had appealed initial decision to the Press Council on the grounds that new information had become available and there had been an error in the Ombudsman’s application of the principles of the code of practice. Photograph: Gareth Chaney Collins

A complaint by Solidarity TD Paul Murphy TD over an article by Miriam Lord in The Irish Times has not been upheld by the Press Ombudsman.

The article, published on July 12th, 2017, was a commentary on a protest in Jobstown which resulted in Mr Murphy facing court charges. He was later cleared.

Mr Murphy wrote to the editor of The Irish Times, Paul O’Neill, claiming it was an “inaccurate summation of the nature of the protest”.

In a submission to the Office of the Press Ombudsman, the editor of The Irish Times stood over the article and stated that it had not claimed the banging on the car windows had continued for hours, rather that “these things occurred while the women were trapped in the car”.

The editor said Mr Murphy referred “selectively to video footage and transcripts made available by the ‘jobstownnotguilty’ website and other matter”.

He stated there was contradictory evidence at Mr Murphy’s trial and that the conclusion of the jury was that the people charged were not guilty, not that the women were not falsely imprisoned. The editor concluded by offering, in “the interests of conciliation”, to consider a letter for publication from Mr Murphy.

Mr Murphy replied that the article had contained “unfounded assertions about the events”, that the jury at the trial was only “entitled to determine the guilt or innocence of the accused” and not to decide on other matters, and that the editor had not addressed his complaint about the description of him hiding behind Dáil privilege to make claims of perjury.

The complaint was forwarded to the Press Ombudsman, who found he had insufficient evidence to make a decision on the first two parts of Mr Murphy’s complaint. “Having read the submissions made to my office I am unable to determine how long the tánaiste and her assistant were trapped in their car or how long the banging on the windows and the shouting of obscenities lasted,” he said.

He did not uphold Mr Murphy’s complaint that a statement in the article that he “disregarded repeated invitations from Minister of State for Finance Patrick O’Donovan to repeat his allegations outside the protection of the chamber” gave a clear and false implication that he was hiding behind Dáil privilege to make claims of perjury.

Mr Murphy subsequently appealed the decision to the Press Council on the grounds that significant new information had become available and that there had been an error in the Ombudsman’s application of the principles of the code of practice. At its meeting on November 3rd, the council considered the matter and decided there was insufficient evidence provided to support the appeal on either ground and that the decision therefore stands.

In another decision, the Ombudsman partly upheld a complaint by Emerald Business Consulting Limited and Danny Cox that The Irish Times had not provided sufficient opportunity to respond to an article published online on March 8th, 2017, and in print the following day about an investigation in Spain into the company’s affairs. It found The Irish Times had taken sufficient action to deal with another part of the complaint, and that he had insufficient evidence to make a determination on other parts.

A complaint by UCD meteorologist Prof Ray Bates that he had been described in Village magazine as a “climate change denier” was not upheld.

1 Farmer seeks to challenge €3.6bn Intel plan in High Court
2 Who are Ireland’s 17 billionaires?
3 Council tells Johnny Ronan firm to keep the noise down at D4 Embassy venue
4 Apple’s cash mountain, how it avoids tax, and the Irish link
5 How to . . . move (almost) everything to your new phone
6 Explorer Petrel gets wider injunction to block sale of shares
7 Intel shares jump 7% on strong earnings and revenue forecasts
8 Cosgrave should give his speech to Web Summit’s partners in Saudi Arabia
9 Steinhoff’s European unit attracting interest for buyout
10 Help, I’ve no PRSI stamps – can I still get a pension?
Real news has value SUBSCRIBE