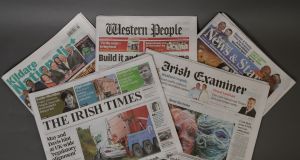 The Irish Times DAC has agreed a deal to acquire all the publishing and media interests of Landmark Media Group, the Cork-based company that owns the Irish Examiner newspaper and other media assets.

Financial details of the transaction have not been disclosed but AIB has taken what is described as a “significant debt restructuring” as part of the process. The share purchase agreement was signed on December 5th.

The acquisition will require separate approvals from the Competition and Consumer Protection Commission, the Minister for Communications, and the Broadcasting Authority of Ireland. This is expected to take between four and six months to complete.

Its radio assets comprise a 75 per cent stake in both WLR in Waterford and regional station Beat, and a 17.6 per cent holding in Cork local station Red FM.

The Irish Times DAC publishes this newspaper and has a daily online news website. It also owns property website Myhome.ie and has a number of publishing contracts with third parties.

Liam Kavanagh, managing director of The Irish Times, said the proposed transaction was a “once-off opportunity in a market that will definitely consolidate”.

“We don’t underestimate the challenges ahead but this combination could underpin the future of two long-standing, Irish-owned media organisations…that are like-minded editorially.”

Mr Kavanagh said the intention was to retain the “core identity and independence” of the respective news titles. Each would retain their editorial integrity and the overall increase in audience would allow the group to build a digital platform with a strong reach at home and abroad, he said.

The consolidation also presented the opportunity to strengthen and grow existing print advertising revenues, and would help to secure contract print revenues.

Mr Kavanagh said The Irish Times was committed to working with the respective union groups in each company on any restructuring proposals that would need to be made. The combined entities would have publishing revenues of about €100 million and employ around 900 staff.

In a note to staff, Tom Murphy, managing director of Landmark Media, said the sale of its assets to The Irish Times was in the “best interest of all of our newspaper and other media companies and assets”.

“Consolidation within the industry is an inevitable outcome and both Irish-owned groups will be best positioned to survive and prosper as part of a larger, stronger and better resource and unified entity,” he added.

Mr Murphy said The Irish Times was “suitably resourced” to “navigate the challenges” currently faced by the industry.

He said it would be “business as usual” for the Cork-based group, while it awaits regulatory approvals, and it would continue to focus on “putting out the best newspapers we can” in the intervening period.