Investment seen as vote of confidence in post-Brexit Britain 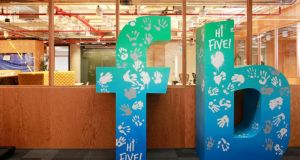 Facebook opened its new London office on Monday and said it would add another 800 jobs in the British capital in 2018, underlining its commitment to the UK as the country prepares for Brexit.

The investment, which makes London the biggest engineering hub for Facebook outside the United States, was welcomed by finance minister Philip Hammond, who was given a tour of the new building, off Oxford Street. “It’s a sign of confidence in our country that innovative companies like Facebook invest here,” he said.

Facebook announced the investment in November 2016, shortly after Google said it was building a new hub in the city that will be able to accommodate more than 7,000 employees.

The twin announcements were seen as a vote of confidence in London’s future as a technological hub despite the decision to leave the European Union, which has thrown Britain’s future trading relationships in doubt.

The new jobs, which come 10 years after the company set up its first London office, will take Facebook’s total British workforce to more than 2,300 by the end of 2018, it said. – Reuters