Disney in the picture to win battle for Fox empire 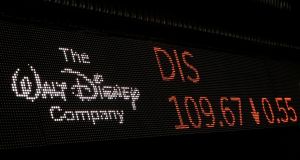 Walt Disney is in the lead to acquire much of 21st Century Fox’s media empire, though rival suitor Comcast remains in contention, people familiar with the matter said on Tuesday.

The Murdoch family, which controls Fox, prefers a deal with Disney because it would rather be paid in Disney than Comcast stock, and expects a potential deal with Disney to be cleared by US antitrust regulators more easily, one of the sources said.

However, no deal is imminent and several issues have yet to be fully negotiated, the sources said.

CNBC had reported earlier on Tuesday that a deal for Disney to buy Fox’s movie studio and television production assets for more than $60 billion could come as early as next week.

Fox shares rose 1.6 per cent in midday trade, while Disney tumbled 3 per cent. Comcast shares were down 0.9 per cent. – Reuters

1 Chris Johns: Ireland risks populist culture war between young and old
2 ‘Life in Vilnius reminds me of Ireland in the 1990s’
3 Dublin housebuilder records €11m gain after striking deal with bankers
4 Boeing identifies new software flaw in grounded 737 Max
5 The Irish economy is thriving but if you’re not feeling it – here’s why
6 GoMo is being investigated by advertising authority
7 The ‘gangster’ superior, the Irish priest and the wealthy widow
8 Petrel gets injunction preventing share sales by certain investors
9 Irish people like nothing more than being bribed with their own money
10 Relationship with Pat Cox prompted hiring of son Patrick, court told
Real news has value SUBSCRIBE