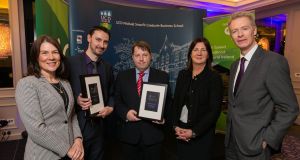 Irish Times journalists Mark Paul and Ciarán Hancock have won the business news story of the year award for an article on the boardroom row at Independent News and Media (INM) over its proposed bid for radio station Newstalk.

The story centred on how INM’s then-chief executive Robert Pitt and the group’s chairman, Leslie Buckley, had a major dispute over the price tag of a proposed bid for Newstalk, which is owned by INM’s biggest shareholder Denis O’Brien.

The Office of the Director of Corporate Enforcement is investigating the matter following a protected disclosure, while Mr Pitt left his role in INM after earlier failing to back Mr Buckley’s re-election as chairman at the company’s annual general meeting.

Other winners included Brian Carey of the Sunday Times who won the economic commentator/business analyst category for articles on foreign direct investment, NAMA and INM.

Mark Tighe, also of the Sunday Times, was named specialist business reporter of the year for submissions on Denis O’Brien and another on “judging the judges”.

The business interview of the year went to Gretchen Friemann of INM for her interview with Jeremy Masding, the chief executive of Permanent TSB.

Peter O’Dwyer from the Ireland Edition of the Times was named upcoming journalist of the year, while the technology reporter of the year went to Adrian Weckler of INM for his article on the dark web.

Finally, an outstanding achievement award was presented to Ingrid Miley of RTÉ for her contribution to business journalism across both radio and television in a career spanning almost 40 years.

UCD Smurfit School highlighted the “insight and clarity” she has brought to some of the most complex industrial relations issues Ireland has faced, including major strikes and reporting on negotiations in public sector pay and reform.

1 Fianna Fáil may have just pressed the pause button on the property market
2 UK to prioritise EU trade deal over one with United States
3 Who are Ireland’s 17 billionaires?
4 Dunnes premature in challenging Point Village resolution move, Supreme Court finds
5 State ranked highly for attracting skilled workers but low on gender issues
6 Are there annual limits on inheritances or gifts to a child?
7 My father in a nursing home wants to gift me his house
8 Belfast regeneration project worth £500m gets green light
9 European investor acquires Harcourt Road offices for €55m
10 New blow for Ted Baker as accounting scandal doubles in size
Real news has value SUBSCRIBE