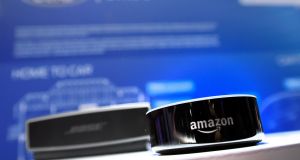 All Irish radio stations are now accessible through Amazon’s voice-activated speaker range and its digital assistant Alexa, as they bid to maintain the popularity of the medium in the era of the smart home.

The Irish Radioplayer service, a partnership between RTÉ and the Independent Broadcasters of Ireland (IBI), have launched an Alexa “skill”, which allows owners of devices such as the Amazon Echo, Echo Dot and Echo Plus to access radio stations once they enable the skill via the Alexa app saying “Alexa, enable Irish Radioplayer”.

The move marks a new phase for the Irish Radioplayer and comes on a day when Amazon confirmed that it has started shipping Echo devices to Ireland. It began doing so quietly before Christmas, when the Alexa app also started to appear in app stores.

“This development ensures that our great Irish radio content will now be available with a simple voice command on the new devices,” said Scott Williams, director of the IBI, chair of the Irish Radioplayer steering board and group content director for Wireless Group.

These skills can be enabled via the Alexa app or by saying “Alexa, enable FM104”, with stations starting up on voice commands such as “Alexa, play FM104”.

The Irish Radioplayer will also launch this year on Sonos smart speakers and will be integrated into the car platform SDL, which was developed by Ford and is being adopted by other car companies including Toyota.

RTÉ director of strategic platforms and partnerships Aisling McCabe said Alexa was a way to “further extend the reach of RTÉ services” through new technologies.

A recent Reuters Institute report predicting media trends for 2018 highlighted rising levels of interest in audio output. Some 58 per cent of publishers indicated that they were exploring content for voice-activated speakers such as the Amazon Echo, Google Home and the forthcoming Apple HomePod devices.