Buckley says goodbye to INM for the second time

Cantillon: chairman will depart March 1st as part of overhaul of the media group’s board 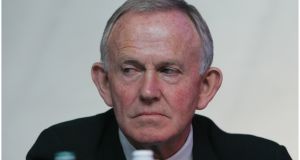 INM chairman Leslie Buckley, who will step down as chairman on March 1st. Photograph: Bryan O’Brien

For such a hardened corporate battler, it will surely rankle with Leslie Buckley that he must depart as chairman of Independent News & Media (INM) in difficult circumstances for the second time in seven years.

The first occasion was in 2011 when, at the height of his ally Denis O’Brien’s battle with Sir Anthony O’Reilly for control of INM, Buckley was ousted in a shareholder vote. A year later, he was reappointed chairman in a triumphant return.

Buckley announced his intention to resign on Friday, three days before a scheduled High Court hearing over an investigation into INM by the State’s corporate watchdog, which was sparked by a whistleblower complaint about Buckley.

It will feel an unseemly exit for Buckley, as he faces demands from the Office of Corporate Enforcement (ODCE) to turn over personal files related to the appointment of outside security experts who gained access to INM’s internal systems.

Before he departs on March 1st, perhaps Buckley will answer a question asked of him by the ODCE: who paid the bill for this outside access, and was it done for the benefit of INM?

Buckley was a nominee of the board of INM’s main shareholder, Denis O’Brien. Sources speculate that another O’Brien nominee, Paul Connolly, could step into the chair.

If Connolly, a longtime business associate of O’Brien, is elevated to chairman, INM will have to explain how his appointment fits in with corporate governance guidelines, which say the chair must be independent upon appointment.

It would also be an interesting appointment on the basis that Connolly previously sued INM as a director, in objection to an exit package given to former chief executive Gavin O’Reilly.

INM is appointing four new non-executive directors to its board. Notably, one of those is John Bateson, the right-hand man of Dermot Desmond, INM’s second largest shareholder.

It would be interesting to know what Desmond has made of the extraordinary revelations to flow from INM’s boardroom in the past 15 months.