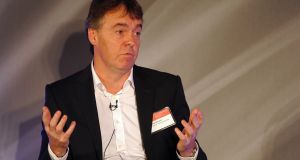 Sky chief executive Jeremy Darroch said the broadcaster can live without Sky News, signalling the pay-TV company is ready to do what it takes to gain approval for the acquisition by 21st Century Fox.

“I wouldn’t describe Sky News as critical to the business today, indeed I wouldn’t pick any part of our business and say it’s critical,” Mr Darroch said on a conference call with analysts Thursday. “If for any reason we didn’t have Sky News, I don’t think that would be material in terms of the direction of the business.”

Sky is waiting for UK approval to be bought by Fox, which in turn plans to sell the company to Walt Disney. The UK’s Competition and Markets Authority said this week that the £11.7 billion (€13.5 billion) Fox-Sky deal could only go ahead if Sky News is split off or insulated in a way that would prevent Fox executive chairman Rupert Murdoch gaining too much influence over British media.

Shares of Sky rose as much as 1.2 per cent and were up 1 per cent at 1,034 pence as of 10.25am in London. The stock has climbed about 15 per cent since mid-November as investors have become more confident a takeover will materialize. Fox’s offer for the 61 per cent of Sky it doesn’t already own is 1,075 pence a share.

“Sky News is a plus to have for branding purposes, but there is an understanding that it’s becoming a problem,” Bruno Burki, an analyst at Square Global Markets, said by phone. “They’ll do whatever it takes to get the deal over the line.”

Mr Darroch praised Sky News as a “great” service and said it was highly valued, but that it was more important to Sky when the company first launched.

“It gave us a lot of brand presence, it was an area we could build in,” Mr Darroch said.

In November last year, Sky told regulators that it would consider closing the channel if it became an obstacle to the Fox takeover. Working through the regulator’s concerns about the Fox deal is a focus for Sky, Mr Darroch said on a call with reporters.

“It’s a process that is predominantly led by 21st Century Fox and we will assist in that,” he said. Mr Darroch declined to comment on his preferred option for the future of Sky News.

Sky added 365,000 customers and reduced the rate at which subscribers leave, according to a statement from the London-based company. Earnings before interest, taxes, depreciation and amortisation rose 10 per cent to £1.1 billion pounds.

Facing the prospect of rising costs for sports like Premier League soccer, Sky has been investing in scripted entertainment to compete with Netflix and Amazon.co. Its shows including Riviera, a thriller set in the south of France, and Britannia, a period drama about the Roman conquest of Britain, helped draw subscribers.

Churn, the 12-month rolling rate at which customers leave the business, was 11.2 per cent in its biggest market of the UK and Ireland, down from 11.6 per cent a year earlier. The company has more than 10.7 million retail subscribers to its services in the UK and Ireland, with 2 million households on its new Sky Q product.