Sale talk about Newstalk brings Murdoch to the fray 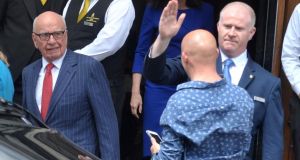 If the billionaire Denis O’Brien can’t turn a buck from Newstalk, could the gazillionaire Rupert Murdoch be the man to do a job with the loss-making station?

It is intriguing that Rebekah Brooks, who ultimately runs Murdoch’s UK and Irish media interests, was so candid at an internal briefing in Dublin this week when asked if Murdoch’s company had run the rule over Newstalk.

Brooks was clear in her response that his Wireless Group is not pursuing any Newstalk deal “for now”, and obviously there is no plan in place for a bid. But she was also clear when she told staff not to rule one out in future.

The high-profile former journalist-turned executive knows full well just how leaky the media business can be. She could have stonewalled the Newstalk question, but chose not to, inviting a leak by pointedly declaring “never say never”.

When Murdoch’s News UK company completed its 2016 deal to buy Wireless – whose crown jewel was UK station Talksport – the seven Irish radio stations that came with it seemed like an adjunct, the shakings of the bag.

Murdoch’s Irish newspaper investments – local editions of the Sun, Sunday Times and the Times – have performed well for him over the years. But what would the inkman want with the likes of FM104 and its strawberry alarm clock, and local radio stations in Louth, Cork and Limerick?

The assumption was that he would quickly offload the Irish radio assets. But here we are two years later and he still controls them and, it seems, is willing at least to countenance buttressing the group with Newstalk.

Consolidation across the challenged traditional sector appears inevitable. But willing buyers for such assets are thin on the ground – just ask O’Brien, who has tried before to flog Newstalk. Buyers capable of wringing economies of scale from a deal, such as Murdoch, are gold dust.

O’Brien dined at a Dublin lunch last summer hosted by Murdoch. When next their paths cross, will it be business or pleasure?