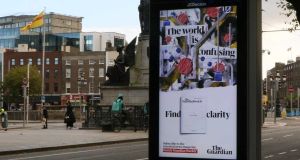 Guardian News & Media has launched a marketing campaign in Dublin and Berlin to promote its international news magazine Guardian Weekly.

Readers in the Irish and German capitals will be targeted through a “find clarity” tagline in a campaign that includes out-of-home advertising on billboards, posters, digital formats and bus sides. The ads feature surrealist artwork by illustrator Rafael Alejandro depicting the coronavirus, Donald Trump and the environment.

A 3D build of the artwork will also appear in Dublin to create the illusion of a Guardian Weekly cover popping out of the poster.

As part of the accompanying digital and social media campaign, Twitter users aged between 25 and 49 located in Ireland are being served ads from by the British publisher, led since January by chief executive Annette Thomas. It worked with creative agency Oliver, media-buying agency PHD and out-of-home agency Kinetic on the campaign.

The Guardian Weekly magazine has recorded 15 per cent growth in its subscription base since lockdowns and other restrictions to curb the spread of Covid-19 were introduced around the world, according to the publisher, with above-average spikes recorded in Germany and the Republic.

Since 2016, TheGuardian.com has also almost doubled the share of online page views that come from European readers outside the UK to 17 per cent.