Leinster Rugby may lose half €18m income without fans

Club lost out on €1.4m in net gate receipts from recent Pro14 match with Munster 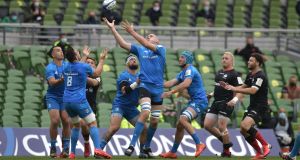 Leinster Rugby faces losing up to half its annual €18 million annual income this season if supporters are not allowed to attend its matches, according to Mick Dawson, the province’s chief executive.

In an interview with Inside Business, an Irish Times podcast, Mr Dawson said: “Fifty per cent of our income roughly is devised from gate receipts. We were meant to play Munster [at the Aviva] in last season’s Pro14 match and we had to give all the money back there. That would generally be a net gate receipt of €1.4 million for us.

“So you don’t have to be a rocket scientist to figure out it’s a lot of money we’ve lost. Looking forward, we’re not sure when we’re gong to get people back through the turnstiles.”

To bridge the gap in its income, Mr Dawson said Leinster had availed of Government wage subsidies and other supports, tapped its own reserves, and implemented pay cuts and deferrals. It also trimmed its cost base where possible.

“At the moment our income streams are slashed, cut in half. We normally have about 12,500 season tickets so we decided not to do that [this season] for the simple reason that we don’t know when people will get through the turnstiles again. So we formed a Leinster club and about 6,000 people signed up for that. Those people are buying the right to get first crack at any tickets that do become available. But there’s no light at the end of the tunnel at the moment.”

On a more positive note, Mr Dawson said private equity group CVC, which has acquired a 20 per cent stake in the Pro14 league, did not use the pandemic as leverage to renegotiate its price of its investment in the competition.

“They stuck with it and all credit to them because I’m sure they could have played a bit of hardball [on the price] in the middle of the pandemic. There are still people who are interested in the sport and will stick with it.”

Separately, Peter Twiss, secretary of Kerry GAA county board, said its running costs were normally €2.5 million-€3 million annually, and gate receipts of €500,000 were “wiped out” by Covid-19 restrictions. To help bridge the gap, the board launched a streaming service to cover its club championship, with 4,000 people paying to watch the county football final.