Reform of Sound & Vision fund would help some, but on its own would lack ambition 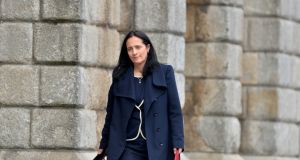 Minister for Media Catherine Martin: Her department found another €2m for the Sound & Vision fund in the July stimulus. Photograph: Alan Betson

Irish media policy is an unloved game where nobody in charge really wants the ball, and whenever they do end up in possession, they dabble in a few keepy-uppies before safely kicking to touch.

Less than three years since the Oireachtas communications committee launched a 321-page report on public service broadcasting with recommendations that were promptly ignored, the Government has kitted out a Future of Media Commission for the next round of reviews, debates and proposals.

Other than the likely pandemic-required shift to virtual sessions, it is unclear how its approach will diverge from the committee’s process, which involved consulting the industry, holding public hearings, researching audience opinions, and renting out Dublin Castle for a forum.

This time, the members are not TDs and Senators, but an eclectic bench of independent figures, with the biggest names announced to date (two more members are to be confirmed) being Alan Rusbridger, the former editor-in-chief of Guardian News & Media, and Mark Little, the former RTÉ journalist who founded the social news agency, Storyful.

Veterans of media-themed seminars, panel events and similar shindigs may be familiar with their tendency to spray in all directions, never quite getting anywhere no matter how clearly defined the topic was at the outset. So it remains to be seen whether the National Union of Journalists (NUJ) push for an expansion of the remit of what was originally termed the Public Service Broadcasting Commission will pay off, or if the conversation will invariably circle back to the strange, unpalatable finances of RTÉ.

The mistake of the previous Oireachtas committee, which was chaired by Hildegarde Naughton and included Green Party leader Eamon Ryan, was to go too big on its recommendations, almost as if they were genuinely trying to solve the problem. Get Revenue to take responsibility for TV licence fee collection? It made sense for believers in public media, and yet it was simultaneously far too radical. Allow RTÉ and TG4 to charge pay-TV companies for carrying their channels? Again, this looked logical from some perspectives, but would have involved far too much feather-ruffling to actually endorse.

This time round, it seems as if the perennially-oversubscribed Sound & Vision scheme run by the Broadcasting Authority of Ireland (BAI) will be the football plonked on the centre of the negotiating table for consideration. Because it is much easier for the Government to tinker with the destination of a small portion of licence-fee receipts than it is to redefine the licence fee itself, the Sound & Vision funding scheme is an attractive target for reform.

The scheme is the largest element of the BAI’s Broadcast Fund, to which 7 per cent of licence-fee receipts are allocated every year. Moves to extend such licence fee “top-slicing” have in the past been used by governments in various countries to put manners on public service broadcasters, but they also reflect the fact that it is not the 1960s anymore, and much of what we see on screen isn’t made in-house, but by independent production companies that don’t want to be over-reliant on one or two clients.

Currently, the only eligible applicants to Sound & Vision are production companies with commissions from Irish television or radio stations. These commissions are often dependent on a successful application to the scheme, which is far from a given. In April, for example, the BAI announced the results of a €7.02 million distribution to 126 radio and television projects, but said the funds sought by a total of 229 applicants had arrived at €19.8 million – that round of Sound & Vision was, in other words, almost three times oversubscribed.

The external assessors had faced “difficult choices”, the BAI said. More difficult choices may lie ahead. As the Government’s press release for the Future of Media Commission takes the time to observe, Sound & Vision is “limited by statute to the broadcasting sector”. Online media outlets – including newspaper groups building up their digital presence through use of video and audio – cannot apply, and some covet that option.

Nor does it necessarily suit broadcasters that the funds are tied to slots on their linear schedule: both RTÉ and Virgin Media Television would like to be able to tap this source of support for online shorter-form content.

Every intervention has a ripple effect. Earlier this year, former minister for communications Richard Bruton ordered the BAI to ringfence €2.5 million of Sound & Vision funds for direct grants to non-RTÉ radio stations to cushion them from the impact of the pandemic on their revenues and costs. For many of those stations, it was an overdue lifeline and a rare moment of recognition for their contribution to public service broadcasting. But the decision also led to uncertainty for independent television producers and their cousins in radio (often sole traders), who feared there was very little left in what was then a finite pot.

In the end, Minister for Media Catherine Martin awarded the BAI an extra €2 million in the Government’s July stimulus, with the result that Irish screen and radio producers will be rushing to complete their applications ahead of Wednesday’s noon deadline for a potentially crucial €4.5 million Sound & Vision funding round.

The lesson here is that even modest adjustments to the scheme could have substantial consequences for the viability of Irish production companies and the health and output of Irish media. But any positive dividends from reform will be slight compared to the benefits that could be yielded if the Government was more ambitious and acted to increase the absolute level of funding to the sector. Spoiler alert: it won’t.