We need Saturday night TV now more than ever

With audiences stuck at home, every break from contagious anxiety helps 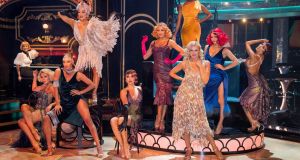 The time has come for a familiar annual theatre, replete with bizarre betting, dubious expressions, unsparing critics and elaborate choreography.

But enough about Budget 2021: Strictly Come Dancing is back on BBC One this Saturday, and – as advertisers all love to say – now, more than ever, its fanbase needs this ridiculous television cabaret.

Linear TV-land isn’t the ultra-confident place it used to be but Saturday nights still hold up better than most, with mainstream channels trotting out old reliables for comfort viewing and pizza chains dripping their cheese over the available sponsor stings. The only reason to expect this to be any different in the first Covid winter is the obvious one: making TV shows under social-distancing requirements and positive-case contingency plans is an exercise in compromise and faff.

And yet broadcasters have to make the best of it, if only because lockdown season has knocked out one major rival – the outside world – and given them a solid impetus to play the “entertaining the nation” card before the ongoing ascent of the streamers makes that line sound even quainter than it already might.

It was 10 winters ago that the Irish recession bound negative-equity households to their couches to consume the 2010 run of The X Factor on either UTV or TV3 (now Virgin Media One), and Twitter users who openly complained about #TheXFactor and other hashtags in which they were not participating were rightly told not to be so rude.

Simon Cowell commanded attention then, though it was this nascent social media watercooler effect, combined with the fact that the only people in the Dublin pubs were IMF negotiators, that drove TV3’s ratings all the way up to an average of 930,500 viewers for that year’s final (the Sunday-night leg of the weekend double-bill) – a channel record that held firm until some big-money sport overtook it five years later.

A full decade, however, has passed since Matt Cardle was declared the man with an X in his factor – a moment unbeaten in the UK ratings for the rest of the decade – and in that period broadcasters have visibly aged in their bids to attract the audiences they once took for granted. Indeed, one of the few new shows to pick up decent levels of chatter in recent times was ITV’s The Masked Singer, which aired at the start of 2020 and will soon return for a second series, its viewers’ relationship with masks having somewhat changed in the interim.

The trick the peak-time successes have traditionally pulled off is attracting cross-generational interest from primary to pension-age. But the children of 2020 – the ones not yet old enough to insist on retreating to parent-free rooms – are growing up accustomed to the existence of streaming services from the free (YouTube) to the subscription kind. Netflix sends “new on Netflix” emails in time for the weekend. Disney+ premieres big-budget content that spent years in development and was, in some cases, originally intended for cinemas. The linear channels are merely one option in the TV menu maze.

The once-celebrated power of social media to turn a piece of mood-lifting fluff into appointment viewing also feels slighter: Twitter has become a petri dish for contagious anxiety and it can be hard work to consume a feed of glib jokes about any shared entertainment without falling into the doom-scrolling trap.

Still, the broadcasters are trying. Chat shows are a tough format to pull off, even when the pool of guests is deeper than it is today, but there is something reassuringly sensible about RTÉ’s promise to “brighten dark winter nights” through its commissioning of Deirdre O’Kane Talks Funny, a six-part Saturday evening talk show in which she will celebrate the careers of “Ireland’s best-loved personalities”. If they’re in the live entertainment game, they might not be feeling the love these days.

The Tommy Tiernan Show is a recent RTÉ pointer to the value of hiring people who are first and foremost comedians as TV hosts, and O’Kane is an in-demand talent: in April, her guest-filled gigs at Dublin’s Olympia Theatre, which should have been the basis for Sky One vehicle The Deirdre O’Kane Show, had to be abandoned in the wave of Covid cancellations.

As for shiny-floor shows, RTÉ hasn’t traditionally scheduled them on Saturday nights the way its UK counterparts have, preferring instead to stitch them into popular Sunday evening slots as a possible distraction from school/work dread. There’s a hole approaching here: Covid-19 risks have claimed the early 2021 series of Dancing With the Stars the way they haven’t the BBC’s Strictly.

Meanwhile, Virgin Media Television has yet to shell out on a direct replacement for Ireland’s Got Talent, the Saturday night contest that ran for two seasons in 2018 and 2019. Instead, it will be happy if winter hibernators are drawn once more to import I’m a Celebrity, Get Me Out of Here, relocating this year from the Australian jungle to a Welsh castle and stripped across every night of the week for about three weeks.

Virgin Media will also be hoping for a touch of the Love Islands, ratings-wise, about another ITV Studios offering, The Cabins, described as a “slow dating” show in which match-made couples move in together on their first date (sounds quick to me). It, too, will be stripped across the schedule.

As for this Saturday coming, it falls to Strictly Come Dancing to let its loyal audience know that for 90 minutes or so – give or take the mawkish bits – they can have nice things. Don’t switch over to the Lotto, no good can come from it.