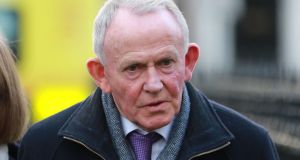 Leslie Buckley: in court filings, he says he has ‘no responsibility in law’ for actions regarding an alleged data breach at INM as he is ‘indemnified’ by the group as its executive chairman at the time. Photograph: Nick Bradshaw

Mr Buckley asserts in legal papers linked to a lawsuit taken against him by former INM executives that he hired Derek Mizak to help search and copy INM’s back-up IT tapes on Friday, October 3rd, 2014. Mr Pitt, who subsequently fell out with Mr Buckley and made a protected disclosure about the alleged data breach and other matters, started work the following Monday.

The papers in which Mr Buckley makes the assertion outline various elements of his defence to a case over the alleged data breach taken against him and INM by its former chief executive Gavin O’Reilly and its former corporate affairs director Karl Brophy.

The two men are part of the so-called INM19 cohort whose emails and other personal data was allegedly breached when the back-up tapes were taken to the UK, unbeknownst to other senior figures at INM, copied and analysed.

The claim is currently the subject of an investigation by High Court inspectors appointed after an application by the State’s corporate watchdog, the ODCE.

Mr Buckley is facing at least 13 other similar lawsuits over the alleged data breach by other members of the INM19, including journalist Sam Smyth and INM’s former finance chief Donal Buggy. However, the only case in which he has so far filed a defence is the one taken by Mr Brophy and Mr O’Reilly.

In defence documents filed for the case, Mr Buckley, who was a board nominee of INM’s then-major shareholder Denis O’Brien, denies that Mr Brophy or Mr O’Reilly’s data was specifically “targeted” in connection with a separate legal row that Mr O’Brien had with the two former INM executives. He claims it was for legitimate INM business.

He accepts, however, that the bill for the data search operation was paid for by Blaydon, an Isle of Man company controlled by Mr O’Brien, and not by INM.

Mr Buckley asserts he ordered the data search after former INM director Allan Marshall raised concerns over a legal contract held by INM, and that he was trying to find out more about this.

In defence filings, Mr Buckley argues that he is not liable for any alleged data breach because he was acting in his then capacity as executive chairman of INM and could authorise such actions on its behalf. Mr Buckley says he has “no responsibility in law” for the actions, as he is “indemnified” by INM as its officer.

He says in the defence documents that “if there was any unlawful act” over the data search, it “occurred without his knowledge and authorisation”, although he also denies any unlawful conduct took place.

He says he is “a stranger” to a spreadsheet unearthed by the ODCE that refers to “targeting” the INM19.

A spokesman for Mr Buckley said last night it would be “inappropriate to comment at this time”. Mr Brophy and Mr O’Reilly declined to comment.