A protest has been held outside Newstalk's studios calling for George Hook to be released from his contact with the station in the wake of his comments on rape. 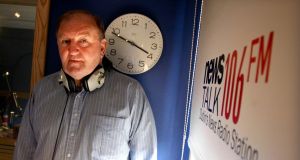 The radio station tweeted just after 9am on Friday that the presenter had been suspended from his duties at the station and that the process arising from his comments last week about rape and responsibility was ongoing.

On its website, the radio station said: “Newstalk has confirmed that George Hook has been suspended from his duties at the station.

“The process regarding his comments last week is ongoing.”

Newstalk declined to comment on the details of the ongoing process, but sources indicated that the company had wanted to implement the suspension earlier in the week, but had not been in a position to do so until today. Newstalk anticipates the overall process will come to a conclusion by next week.

It said the suspension came after the comments were condemned by groups such as the National Women’s Council of Ireland (NWCI).

Managing Editor Patricia Monahan said that comments made were “totally wrong and inappropriate and should never have been made.”

Referring to a UK rape case on his show last Friday, Hook questioned why the woman had gone back to the hotel room of a man she had just met, asking: “Is there no blame now to the person who puts themselves in danger?”

The controversy over comments escalated with the withdrawal of advertisers from his lunchtime show and the refusal by another Newstalk presenter to go on air this weekend. Tesco confirmed on Thursday evening that it had ceased advertising during Hook’s lunchtime programme, High Noon.

This has been an incredibly difficult week at Newstalk. But I'm immensely proud of the professional and brave staff here.

“Our advertising package includes spots during a variety of shows distributed across the station,” a spokesperson for the retailer said.

“We confirm that we have restricted the airing of our adverts around this particular show in the short term, although we keep this under review.”

On Monday, the hotel group Dalata cancelled its sponsorship of High Noon.

Also on Thursday evening, Dil Wickremasinghe, who presents Newstalk’s Global Village show every Saturday evening, issued a statement saying she would be going off-air in protest against the station’s handling of the issue.

Speaking at his party think-in in Co Tipperary on Friday, Taoiseach Leo Varadkar said: “I strongly disagree with the comments that he made. Nobody who is raped or sexually assaulted is ever responsible for that in any way.

“So I totally disagree with and abhor the comments that he made. He has since then of course apologised, apologised profusely and I think he does understand that what he said about this issue and on that occasion also in the past is unacceptable,” he said on RTÉ’s Morning Ireland.

“I think it’s indicative of attitudes that still exist in Irish society that need to change.”

What did George Hook say?

Speaking during his radio show, High Noon, on Friday September 8th, Hook discussed the case of the 19-year-old woman who alleges she was raped by a former member of the British swim team. She alleges that she was raped by the man after having consensual sex with a different man who was the swimmer’s friend.

“She was passed around, went the story. And apparently she went to bed with one guy and he goes out and another guy comes in. She doesn’t want to have relations with the second guy but he forces himself upon her. Awful,” said Hook.

On Monday, Hook told Newstalk listeners he was “truly sorry” for his comments.

In a statement which The Irish Times understands was pre-recorded in advance of the broadcast, the presenter apologised for the comments which led to a storm of criticism.

“I want to start the programme with a profound apology,” Hook told listeners at the start of Monday’s High Noon show. “On Friday, September 8th I made comments about rape on the programme which were totally inappropriate and unacceptable and I should never have made them. I realise that those comments caused widespread hurt and offence and for this too I am truly sorry.

“I would particularly like to apologise to all victims of rape, the families, the representatives of the organisations who work day and night to reduce the stigma around rape. And also for those who try to increase reporting of crime involving sexual violence against men and women.. It was wrong of me to suggest that any blame could be attributed to those victims or that they bear any responsibility in the crimes committed against them. By doing that I played a part in perpetuating the stigma and I unreservedly apologise for doing so.

“Everybody has the right to enjoy themselves without fear of being attacked and as a society we have a duty to our daughters and granddaughters to protect that right. On Friday, I failed in that duty of care, a failure I deeply regret and for which I am truly sorry.”