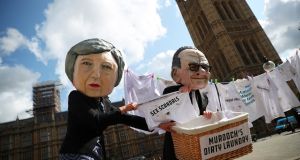 The British government should judge Rupert Murdoch’s bid for broadcaster Sky on facts and not politics or risk stifling inward investment after Brexit, his son and fellow executive James Murdoch said on Thursday.

Appearing before an audience of media executives hours after the government referred Twenty-First Century Fox’s $15 billion bid for a detailed investigation, James Murdoch struck a combative tone in defence of his family’s record in building a business that spans TV, film and news.

He was confident the country’s independent regulators would assess the deal on its merits and not be swayed by politicians with scores to settle over how his father’s newspapers had treated them over the decades.

“Whether or not 30 years ago someone had a grievance about a political position that a newspaper took that is no longer a part of the business is irrelevant,” said Murdoch, who is chief executive of 21st Century Fox and chairman of Sky.

“We have a clock on this now. We are confident it goes through.”

The Murdochs returned to buy full control of Sky in December 2016, more than five years after a phone-hacking scandal at their now-defunct News of the World tabloid sank a previous attempt.

Since that failure, they have split their company in two, separating the newspapers from the entertainment assets to help to smooth the passage of the deal.

But their reputation remains damaged in Britain after a public inquiry revealed the close ties between Rupert Murdoch and prime ministers Margaret Thatcher, Tony Blair and David Cameron, creating the impression of puppet-master Murdoch pulling the strings of the country’s politicians.

In response, Theresa May’s government has been much more cautious, referring the bid for lengthy investigations and in one instance ignoring the advice of the media regulator Ofcom which had cleared it on grounds of broadcasting standards.

Earlier on Thursday, media secretary Karen Bradley said Fox would now need to prove it could uphold broadcasting standards during a six-month review in order to secure the deal, following a series of sexual harassment and discrimination lawsuits at the Murdoch’s Fox News network in the US.

Asked if the Murdochs could be trusted after presiding over scandals at their British newspapers and later at Fox News, James Murdoch said the company had dealt effectively with the problems.

He defended his stewardship of Sky, saying few others had invested as much and over such a long period. He added that the issue of inward investment would become even more important as the country prepares to leave the European Union.

“If the UK truly is open for business post-Brexit we’ll look forward to moving through the regulatory review process and this transformative transaction for the UK creative sector becoming an affirmation of that claim,” he said.

The government has given the UK Competition and Markets Authority 24 weeks to review the takeover on the impact it will have on broadcasting standards and media plurality. It will make recommendations, including any possible remedies, to Bradley.

“I must then come to a final decision on whether or not the merger can proceed,” she told parliament on Thursday.