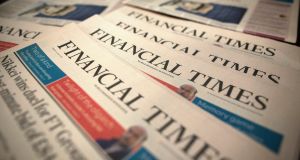 Paul McClean is believed to have been a reporter for the Financial Times, having graduated from Oxford University

A British man has died in Sri Lanka after reportedly being dragged into a river by a crocodile.

According to the reports, 24-year-old journalist Paul McClean was washing his hands in the river when he was attacked by the reptile.

Search and rescue teams are said to have combed the area - a lagoon known as Crocodile Rock - in a desperate attempt to find him alive.

Mr McClean is believed to have been a reporter for the Financial Times, having graduated from Oxford University.

It is reported that he was staying with four friends at the East Beach Surf Resort near Elephant Rock in the south east of the island.

A spokesman for the Foreign Office said: “We are assisting the family of a British man who has died in Sri Lanka.”

1 Air travel never going ‘back to way it was’
2 Irish company to test vaccines on volunteers deliberately infected with Covid-19
3 Stripe wins more corporate customers, announces Salesforce deal
4 Coronavirus vaccine: 15 billion doses needed to inoculate the planet
5 Why working in an office beats living at work
6 Should I switch bank now with Ulster Bank at risk of closing?
7 BoI redundancies, ‘tax war’ warning for Ireland, and retailers in rent arrears
8 PayPal launches new debit card for business users
9 Bank of Ireland sees more than 1,400 staff apply for redundancy
10 Will brother’s widow get half of our parents’ estate when they die?
Real news has value SUBSCRIBE