Dalata ditching its sponsorship of George Hook is progress

Hotel group did right thing, but damage will linger from Newstalk rape comments 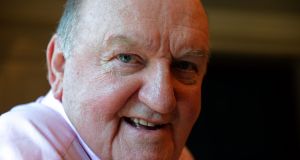 The fallout from on-air rape comments made by a Newstalk presenter is about freedom – but not the freedom of George Hook to say whatever he wants and to hell with everyone who suffers as a result, because, well, he’s George.

It’s about the freedom to walk alone, run alone, drink with men, trust men and exist without fear of their violence; to not be lectured that it’s “not all men” while simultaneously being told to stay forever on alert because you never know who might be on the other side of the hotel room door.

It’s about the freedom to want and enjoy sex with a man in any circumstance and not have other men conclude “so that’s it, now, she must be fair game for me, too, and never mind this crazy consent business”.

It’s about living free of male hatred of female sexuality and autonomy. And it’s about the freedom to insist on all of the above freedoms and not be obliged to debate them with men.

Hook has apologised for his comments, on air at the start of his High Noon programme on Monday, and so has Newstalk, but unfortunately it doesn’t end there. Together they have unleashed a familiar wave of FM-validated misogyny: I can’t be the only person who spent the weekend nauseous from the words of rape apologists who crawled out to say Hook was speaking “sense”, and women shouldn’t leave their bodies unattended like luggage at a bus station or perhaps, as former BBC Crimewatch presenter Nick Ross posited in 2013, like a laptop in a car.

These analogies – women as property, as objects – are as revealing as they are deeply upsetting. They are a form of victim blaming from which escape becomes logically impossible. They encapsulate rape culture.

The business of media and its editorial failings are close cousins, which Dalata Hotels Group has neatly and commendably illustrated by confirming that it has terminated its commercial relationship with Newstalk and its sponsorship of Hook’s programme.

Some have it that Dalata’s swift decision is simply PR (isn’t everything?) and that its deal was coming to an end anyway; or even asserting on social media that the largest hotel group in Ireland should continue to sponsor the show, as if it has some duty to associate its brand with the idea, as heavily implied by Hook’s comments, that hotels are unsafe places for women.

But never mind why Dalata has cut the cord, or why it got involved with Hook in the first place. The far more important thing is that it has taken the stance it has on this occasion. The group’s statement coupled with comments by chief executive Pat McCann represent a welcome stand on behalf of all women.

Let’s flash back to the last occasion advertisers sought to disassociate themselves from a male broadcaster regarded as a commercial heavyweight – as a star, no less – by his employer. This requires a journey back through the mists of time to, er, April.

That was when Rupert Murdoch-owned Fox News channel in the US sacked Bill O’Reilly following an exodus of advertisers from the O’Reilly Factor, which was in turn triggered by a New York Times investigation that found five women had received settlements in exchange for their agreement not to pursue allegations of sexual harassment and other inappropriate behaviour.

O’Reilly’s exit sent a message that women are still unused to hearing – that such men won’t always be celebrated by the rest of the media, that this lionising is no longer a given in 2017.

Dalata’s distancing from Hook is progress again. But the culture that led to his comments in the first place is far from dead.

The chief executive of the Dublin Rape Crisis Centre, Noeline Blackwell, has said plainly that Hook’s remarks could contribute to the reluctance of women to report rape and sexual assault. Who benefits from this? Rapists. So why do men with media platforms choose to perpetuate rape culture or deny its existence? I feel sick just thinking about their attitudes, never mind writing about them. By contrast, Hook felt thoroughly able to speculate wildly and at length about a UK rape case. That’s the confidence of ignorance.

I knew little of the man until I encountered him as a panellist at a “Women Mean Business” event in 2010. When it was his turn to speak, he bombastically declared “women, get over yourselves” to a roomful of face-palming female executives and spent the rest of his allotted time spouting a selection of words that to the untrained ear all sounded like variants of “me”.

This, apparently, was exactly what made Hook an in-demand broadcaster in Ireland. Newstalk, fairly dubbed “Menstalk” for its lack of female presenters, aspires to be “Viewstalk” and Hook continues to fit that sorry “opinion-led” bill: the only thing that’s modest about High Noon is its audience of 98,000.

The station has in the past attracted vastly more male listeners than female ones and once spoke about trying to correct this imbalance. Recent evidence suggests it is instead doubling down on its inherent Hookness, blaring out prejudice-laced dog whistles. Its apologies will mean nothing if it pursues this unlistenable alliance of the dangerous and the dumb.