Hook asked: ‘Is there no blame now to the person who puts themselves in danger?’ 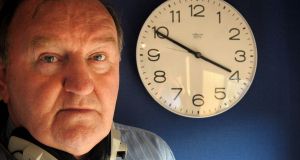 George Hook: I should never have made the comments

George Hook has said he is “truly sorry” for comments he made about rape on his radio programme last Friday.

In a statement which The Irish Times understands was pre-recorded in advance of the broadcast, the Newstalk presenter apologised to listeners for the comments which led to a storm of criticism.

“I want to start the programme with a profound apology,” Hook told listeners at the start of Monday’s High Noon show. “On Friday, September 8th I made comments about rape on the programme which were totally inappropriate and unacceptable and I should never have made them. I realise that those comments caused widespread hurt and offence and for this too I am truly sorry.

“I would particularly like to apologise to all victims of rape, the families, the representatives of the organisations who work day and night to reduce the stigma around rape. And also for those who try to increase reporting of crime involving sexual violence against men and women.. It was wrong of me to suggest that any blame could be attributed to those victims or that they bear any responsibility in the crimes committed against them. By doing that I played a part in perpetuating the stigma and I unreservedly apologise for doing so.

“Everybody has the right to enjoy themselves without fear of being attacked and as a society we have a duty to our daughters and granddaughters to protect that right. On Friday, I failed in that duty of care, a failure I deeply regret and for which I am truly sorry.”

Earlier on Monday, Ireland’s largest hotel group Dalata cancelled its sponsorship of High Noon in protest at the broadcasters’ comments.

In a tweet on Monday morning, the company said: “Our commercial relationship with Newstalk and sponsorship of George Hook High Noon has been terminated this morning.”

The company added that it could not “support any radio station that allows inappropriate & hurtful comments to be made”.

2/2 Our commercial relationship with Newstalk and sponsorship of George Hook High Noon has been terminated this morning.

It is understood that Dalata’s contract with Newstalk was up for renewal in October. Dalata is the largest hotel operator in Ireland. A publicly-listed company, it operates 32 hotels in Ireland and the UK under the Maldron and Clayton Hotel brands, as well as managing a portfolio of five “partner” hotels.

Later in the day, singer Mary Coughlan walked out of a studio interview with Ivan Yates, citing “respect for rape victims” as the reason for her protest.

Hook previously apologised for the comments in which he asked why a young woman who had just met a man in a bar would go back to his hotel room, in the context of a case where a 19-year-old woman alleges she was raped by a former member of the British swim team.

The chief executive of the Dublin Rape Crisis Centre said comments such as those by Hook could lead to victims of rape and sexual assault not reporting their cases to the authorities.

Noeline Blackwell said Mr Hook’s comments were problematic, wrong, and entirely irresponsible. “When someone is raped the only person responsible is the rapist.”

The National Women’s Council of Ireland (NWCI)applauded Dalata’s action, saying it sent a “strong message that these comments are utterly unacceptable”.

The NWCI has complained to Newstalk and to the Broadcasting Authority of Ireland (BAI), on the basis that Hook’s comments infringed on the regulation of Section 48(1) of the Broadcasting Act 2009, which says that “Every broadcaster must ensure that it does not broadcast anything which may reasonably be regarded as likely to cause harm or undue offence.”

Director of NWCI Orla O’Connor also welcomed the apology from the broadcaster, but said this was not the first time Hook had made such comments. ” It is clear that disciplinary action is now required to ensure such comments are not repeated and to counter balance the impact of these comments,” she said.

A spokesperson for Newstalk declined to comment on Dalata’s withdrawal, or on whether any further disciplinary action was envisaged.

Speaking during his radio show, High Noon, on Friday Hook discussed the case of the 19-year-old woman who alleges she was raped by a former member of the British swim team. She alleges that she was raped by the man after having consensual sex with a different man who was the swimmer’s friend.

“She was passed around, went the story. And apparently she went to bed with one guy and he goes out and another guy comes in. She doesn’t want to have relations with the second guy but he forces himself upon her. Awful,” said Hook.