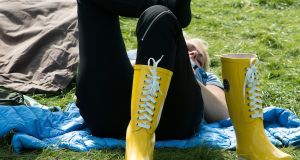 The 2018 figures include a contribution from Electric Picnic, held at Stradbally, Co Laois. Photograph: Dave Meehan

New accounts filed by LN-Gaiety Holdings Ltd show that the business made the dividend payout as it recorded a pretax loss of £2.2 million in spite of revenues increasing.

Revenues at LN-Gaiety last year increased 7 per cent from £199.3 million to £215.8 million. This included revenues from the 2018 Electric Picnic at Stradbally in Co Laois.

The directors’ report accompanying the LN-Gaiety results states that the pretax loss of £2.2 million was mainly due to a non-cash exceptional cost of £12.4 million relating to goodwill impairment.

In an interview, Mr Desmond said he is very much “hands-on” in the operation of LN-Gaiety in the UK, spending three days in there every week.

The total number to attend LN-Gaiety events last year increased by 3.2 per cent to 5.5 million.

In August last year Mr Desmond’s Gaiety Investments agreed to sell half of its MCD business to Live Nation, and Mr Desmond confirmed that the deal had yet to go through as the UK-based Competition and Markets Authority had not concluded its merger inquiry.

Mr Desmond said MCD would sell about 1.8 million tickets in Ireland this year.

He said: “That number of tickets in the context of the size of Ireland is a big number. It has been a very successful year.”

Mr Desmond said there was “a lot in the pipeline” in terms of concerts here for next year but that Brexit was creating uncertainty.

He said: “It is from a logistical point of view where you are talking about tours involving moving 25-30 trucks and 150 people of different nationalities.”

Shareholder funds at LN-Gaiety at the end of December last year totalled £90.36 million. Numbers employed at the business totalled 631 and staff costs came to £19.6 million.