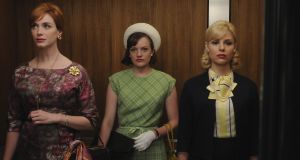 It’s tough to imagine, but there are, according to reports, some television viewers out there who have yet to enjoy the pleasure of Mad Men. The 1960s New York advertising industry drama that gave us Don, Peggy, Joan, Betty, Pete and Roger was made for US cable network AMC between 2007 and 2015, airing in this part of the world on BBC Four in its early seasons and premium channel Sky Atlantic in its later ones. It currently resides on Netflix, but that might not be the case forever.

The global rights revert to distributor Lionsgate next year, its vice-chairman Michael Burns made sure to mention at a recent investor conference, the Hollywood Reporter, er, reported. The hope is that the office politics, affairs and other crises of Sterling Cooper Draper Pryce will now generate the kind of sale price that would make Roger Sterling drink Manhattan dry in celebration.

And it’s a realistic hope. Giant media companies are getting their ducks in a row for an all-out streaming services war, and paying inflated prices for classic “library titles” appears to be a costly part of the preparations for most.

Warner Media has apparently paid $425 million to take Friends off Netflix, plus a further $600 million for The Big Bang Theory, in order to populate its imminent streamer HBO Max. Comcast’s planned service Peacock (a name Don Draper would surely reject) is also shelling out $500 million to take the US version of The Office off Netflix, while Netflix itself is reported to have splurged $500 million on Seinfeld.

Mad Men might have more niche appeal than those comedy titles, but it will come to an increasingly crowded marketplace with a badge of quality at exactly the right time for some nice pay cheques to land at Lionsgate. Who knows, maybe it will even pocket enough money to fund the Sally Draper spin-off series Sally fans deserve.

Until then, it will do no harm for Netflix subscribers to indulge in a re-watch or first-time binge.