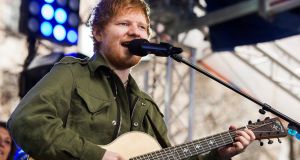 Ed Sheeran fans in Ireland contributed in no small way to help the singer’s main firm clock up revenues of more than €100,000 a day last year.

On one day alone more than 300,000 tickets for an initial seven shows were sold, making history. Due to the phenomenal demand, extra dates were added.

The Irish concerts were part of Sheeran’s ÷ Tour which has gone on to be highest grossing tour of all time, generating $775 million at the box office.

The accounts show that the flame-haired singer, who has strong Irish roots, pocketed a £17.1 million dividend from the global success of his business last year. Sheeran took a £16.5 million dividend in 2017.

In the director’s report attached to the accounts, which are filed in Britain, revenues were said to be “stable on the prior year due to the continued exploitation of music recording and song writing”.

It expects revenues to be strong going forward but acknowledges this “will be dependent on the artist’s continued success”.

Sheeran has family here and maintains his Irish links. He attended the wedding of an Irish first cousin, Lauren Sheeran, in Spiddal, Co Galway, in 2014. And earlier that year, the popular singer/songwriter wore a tie belonging to his Irish grandad, Bill Sheeran, when attending the Grammy music awards in the US.

The late Bill Sheeran was originally from Co Derry, moved to London in his youth and married a nurse from Co Wexford. Bill and Ann Sheeran raised their family in London.