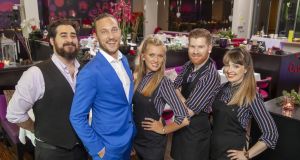 First Dates: no hugs or kisses this year

Covid-19 has put an end to on-screen hugging or kissing between participants in the upcoming series of RTÉ ratings winner, First Dates.

“They can blow each other kisses but no kisses or hugs on our watch due to social distancing. They must and we must abide by all of the protocols. That is an absolute,” Mr Switzer said.

“Any contact is out. It is challenging but everyone is beginning to realise it is the only way we can work. We will have a safety officer on board for the show who will make sure everyone is abiding by the rules. If they don’t, they are off the set – for obvious reasons.”

Mr Switzer claimed Coco’s protocols “are more stringent in many ways than what the HSE has in place”.

He said the company has received about the same number of applicants for the 12 one-hour episodes of the new series as it had last year, “which is terrific”.

Mr Switzer does not expect Covid rules to reduce the prospects of participants finding romance on the show: “We are a nation of romantics aren’t we?”

RTÉ is statute-bound to spend around €40 million on independent productions each year.

“This is one thing I could not conceive that they would change,” Mr Switzer said. “It would require a ministerial order and I would be shocked and horrified if the new Minister would be to sign that order. It would be the beginning of the end of the independent sector in Ireland. ”

He added: “That €40 million spend would be vital to the industry and that €40 million turns into at least €100 million by the time we leverage co-productions and Broadcasting Authority of Ireland (BAI) and tax funding.

“From an independent producer point of view, most of the creative talent lies outside RTÉ and not inside RTÉ in relation to TV production.”

A spokeswoman for RTÉ said: “We are doing all we can to meet our statutory spend obligations with the independent production sector. We have continued to commission programming throughout the pandemic while following RTÉ’s working safely protocols, aligned to HSE guidelines, to ensure the safety of staff and crew and the protection of public health.”

She added: “We are set to announce the autumn season of programmes later this month with a mix of returning favourites and new programmes.”