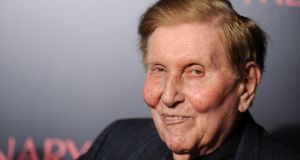 Sumner Redstone, the self-made businessman, philanthropist and second World War veteran who built one of the largest collections of media assets in the world, died on August 11th, 2020 at the age of 97. Photograph: Robyn Beck/AFP via Getty Images 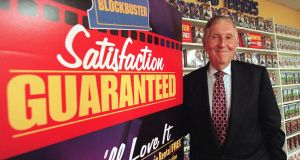 Sumner Redstone, one of a generation of media titans who shaped today’s business of films and television, has died aged 97.

Redstone, a Boston native and veteran of the second World War, transformed a regional drive-in cinema chain into a global entertainment empire spanning the Paramount film studio and two of the most prominent US media companies: Viacom, home to MTV and Cartoon Network, and the broadcaster CBS.

One of the industry’s most colourful characters, he popularised the terms “multiplex cinema” and “content is king”. He was chief executive of Viacom from 1996 to 2005, after which he continued to serve as executive chairman of Viacom and CBS.

After serving in the military in the 1940s, Redstone studied tax law at Harvard and used that training to mastermind acquisitions, engineering deals for Viacom, Paramount Pictures, Blockbuster, CBS and Simon & Schuster.

The cantankerous billionaire had promised to never give up managing his empire. In 2014, age 91, he dismissed his daughter Shari’s prospects as the next chief of the family business, saying he would “not discuss succession?. . you know why? I’m not going to die”.

Redstone feuded intermittently with Shari for decades, resulting in a destructive and prolonged battle over the future of the family business. Their relationship often veered into soap opera levels of drama, helping inspire characters in HBO’s series Succession.

But the testy relationship between father and daughter thawed as his health declined. As Redstone aged and the question of succession became more urgent, his personal life and sexual affairs were aired in the tabloids – and litigated in courtrooms – as disputes arose over his cognitive abilities and corporate governance of his media business.

In 2016, he was assessed by a doctor who told a Los Angeles court that he had difficulty recognising simple shapes and colours. The examination came after his former girlfriend – who had been cut out of the billionaire’s will – filed a legal petition challenging her removal as his primary carer.

“I wish he had made different decisions in his personal life,” Shari Redstone said of her father’s indiscretions.

Despite his speech difficulties, Redstone was able to tell the court in videotaped testimony about who he wanted to manage his healthcare: “Shari.” After that, Shari Redstone took control of the conglomerate and last year shepherded the reunion of Viacom and CBS, which her father had split apart more than a decade earlier.

“He was a force of nature and fierce competitor, who leaves behind a profound legacy in both business and philanthropy,” he said.

National Amusements, the Redstone holding company, said: “With his passing, the media industry he loved so dearly loses one of its great champions. Sumner, a loving father, grandfather and great-grandfather, will be greatly missed by his family who take comfort knowing that his legacy will live on for generations to come.”