Post-Covid television starts to shape up – but with missing pieces 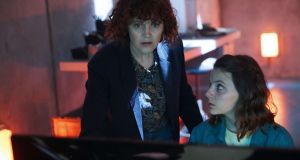 His Dark Materials: Dafne Keen and Simone Kirby struggle to find anything decent to watch on TV. Photograph: Bad Wolf/BBC

You know what it’s like trying to get a group of old friends together in a room: full diaries, non-adjacent postcodes, standard faffing, and then the blessed breakthrough. Everyone signs up, everyone is motivated. Only, say, the outbreak of a highly contagious virus can stop it going ahead.

Welcome to the plot of The One Where the Friends Reunion Can’t Seem to Happen. Conceived as a one-off special to promote the US launch of streamer HBO Max, the “unscripted” big-money gathering of Friends stars Jennifer Aniston, Courteney Cox, Lisa Kudrow, Matt Le Blanc, Matthew Perry and David Schwimmer on the fraying Central Perk sofa has just been postponed for a second time.

In fairness, nobody will feel much like laughing at The One Where Everybody Got Sick, not least HBO’s parent company. After splurging $425 million on the five-year streaming rights to the original series, Warner Media will want to swerve the risk of killing Joey.

If – or, as I prefer to think, when – a Covid-19 vaccine becomes widely available, there’s a reasonable chance that nobody will ever want to stay inside watching television again, not even me. But in the fraught interim, the line-up of available diversions will be defined more by what is missing and different than what has stayed intact.

Netflix devotees, it’s true, should scarcely notice any interruption to their service. The content giant, citing long production lead times, says its 2020 plans for debuting shows and films “continue to be largely intact”, with the “pause” merely meaning that its 2021 content slate will be more weighted to the second half of the year. Elsewhere, however, the gaps, compromises and innovations are already visible.

Reality series and competition formats have had mixed fates to date. There will be no Dancing with the Stars on RTÉ in the early months of 2021, with the ShinAwiL-produced show having ended its 2020 series on a sombre, audience-less note in mid-March. A (sanitised) glitterball will be deployed for the BBC’s Strictly Come Dancing from October, but contingency plans for the shortened run are said to include “no touch” routines, sequinned masks and otherwise out-of-work participants valiantly doing their own make-up.

Before it got cancelled, ITV’s Love Island had been tipped to relocate from Majorca to Poldark country, aka Cornwall, where all of Britain is now busy getting sunburned. Anxious not to lose another ratings magnet, ITV first decreed that I’m a Celebrity … Get Me Out of Here! would definitely be going ahead, only later admitting that the production wouldn’t get anywhere near the Australian jungle this year.

It will instead make the improbable move to a “ruined British castle”, where the risk of exposure to the winter elements will presumably rule out the show’s traditional outdoor bikini shower scene.

Two Irish versions of UK formats – Virgin Media Television’s Gogglebox Ireland and RTÉ’s First Dates Ireland – will also return in Covid-tinged shape. Producer Kite Entertainment has been on the hunt for frontline workers to join the cast of Gogglebox, which is eminently makeable under social distancing conditions, and, of course, it shouldn’t prove any sort of drawback if the selection of TV shows available for Goggleboxers’ blunt dissection is more dubious than normal.

First Dates producer Coco Content, meanwhile, has made a virtue of caution ahead of filming its next series, with the promo line “We’re still bringing the love ... Just hold off on sharing your dessert” matched to footage of what now seems like a doubly alarming fork invasion from a previous series. Among its other precautions, “background daters” – strangers set up on blind dates to fill out the restaurant during filming – will be replaced by “background diners” who know each other.

As high-end dramas are the trickiest type of productions to start or restart, broadcasters have been treating the ones they have in the can like precious commodities.

Not since the 2007-2008 US writers’ strike has the business of scripted television been subject to such a broad, product-altering upheaval. The HBO-BBC adaptation of His Dark Materials provides just one example. It had luckily filmed seven of the planned eight episodes in its second series before anybody had heard of Covid-19. The eighth episode, a standalone story focusing on James McAvoy’s character, Lord Asriel, was on its first day of shooting when it was derailed by coronavirus. The result is that only the completed seven episodes will air and McAvoy is, in his own words, “barely going to be in season two”.

The extent to which dramas with contemporary “real world” settings will embrace the fact of the pandemic will be interesting. In the BBC’s still-suspended Line of Duty, made in Belfast by World Productions, will the officers of AC-12 be obliged to book larger interview rooms for their trademark interrogations? Will tension be ratcheted up not by sudden gunfire, but by a single cough?

Surely, as unnerving as it can be now to see pre-Covid behaviour on screen, there will also come a point when audiences grow utterly tired of unrelenting virus references.

The only series I actively want to see incorporate the crisis is HBO’s Succession, the drama that famously isn’t about Rupert Murdoch and his family. It’s not hard to imagine Succession’s chief mogul Logan Roy holing himself up in a much-staffed bunker as entitled underlings act like elite super-spreaders.

But imagine it is all anyone can do, because having been scheduled to start shooting in April – meaning its third season would, by now, be incoming – the latest production update has it that the Roy family might, fingers crossed, reunite some time before Christmas.

1 Aldi empire wracked by family feud
2 NatWest considers closing Ulster Bank in the Republic
3 Will PTSB be Ulster Bank’s knight in shining armour?
4 Cliff Taylor: What permanently low interest rates mean for you as a saver or borrower
5 How Ireland managed to green the White House
6 Gabriel Makhlouf: ‘A full second lockdown would be very serious for the economy’
7 NatWest confirms review of Ulster Bank as Covid-19 bites
8 EU signals late call on Apple tax appeal as deadline looms
9 TikTok to be banned from US app stores from Sunday
10 Volkswagen close to selling its Bugatti supercar brand
Real news has value SUBSCRIBE