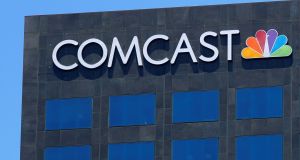 Comcast offset its declining pay-TV business by adding high-speed internet customers, helping the US cable giant beat forecasts for profits and revenues for the fourth quarter.

Excluding the impact of a one-time tax benefit that had lifted results in the year-ago quarter, Comcast made adjusted earnings of 64 cents a share on revenue of $27.8 billion (€24.5 million) in the fourth quarter. Wall Street analysts were looking for 62 cents a share on $27.6 billion in sales.

The Philadelphia-based company lost another 29,000 video customers in the three months ending in December. For the full year, Comcast bled 370,000 cable TV subscribers, an acceleration from 2017, when it had lost 151,000.

In the US, Comcast and its peers have been pressured by the disruption from Netflix. Research group eMarketer expects 33 million Americans will this year “cut the cord” on their traditional TV service in favour of streaming, accelerating from 27 million last year.

Shares in Comcast were up more than 3 per cent in premarket trading.

The Universal film studio weighed on results for Comcast’s NBCUniversal unit. Adjusted earnings at Universal dropped 24 per cent to $179 million, which Comcast said reflected higher operating costs. However profits at NBCU as a whole climbed more than 12 per cent to $2.1 billion in the quarter, helped by strength in broadcast television.

1 ‘I’m so lucky to be in the Caribbean – a million miles from Derry Girls’
2 ‘I left my home, my boyfriend and my dog and upped sticks’
3 Household savings soar as consumers stop spending
4 ‘Never mind GDP; the most fundamental job of any leader is to keep his people alive’
5 Joint accounts: if one of us dies, can the other access the money?
6 Roll up, roll up: capitalism will drive cannabis legalisation in Ireland
7 Ireland’s recovery is partially due to us learning our lesson
8 Hostelworld cancels dividend as it counts coronavirus cost
9 Explaining sudden arrival of €20,000 in my bank account
10 Ashford Castle hotel resort sold for €20m
Real news has value SUBSCRIBE