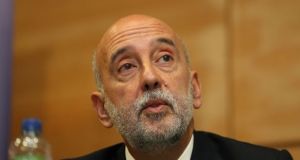 Central Bank of Ireland governor Gabriel Makhlouf has warned that some of the jobs lost in the current crisis will not be recovered.

In an interview in the Business Post, he said the economic recovery would be gradual with the hit to the economy more severe than previously thought.

The Land Development Agency has called for a €10 million housing stimulus fund to help tackle homelessness and a rise in unemployment due to the Covid-19 crisis, according to the Sunday Times Ireland edition.

Former secretary general at the Department of Finance John Moran, who heads up the agency, has said Nama’s €4 billion 2020 dividend should be added to its €1.25bn seed capital to leverage additional sums to create jobs and build houses.

It is “inevitable” that customers will need payment breaks beyond the current three-month period, according to AIB chief executive Colin Hunt who is interviewed in the same paper. He says the bank has agreed 25,000 breaks to customers to date.

The Ireland Strategic Investment Fund (ISIF) is facing an €8 million loss on its €10 million investment in Mainstay Medical, the Sunday Times said. This follows the decision by the medical device company to delist earlier this week. The company cited a lack of liquidity in its shares – which are listed in Paris and Dublin – and the costs associated with being a publicly-listed company as reasons for the decision.

The paper also reports that GAN, the gaming technology company led by Dermot Smurfit junior plans to raise $35 million (€32million) by listing on the Nasdaq later this month. The company is already listed on the AIM in London but is intending to drop this listing prior to the US flotation. The company is currently valued at $119 million, according to the Times.

The Business Post reported that listed insurer FBD has told publicans that claims made under business interruption policies will not be paid out. The insurer has previously claimed it was keen to help policyholders affected by Covid-19 and on Friday joined with other insurers in signing up to measures to aid businesses.

The Government must provide more financial supports for businesses, according to a report in the Sunday Independent. In an interview, EY’s head of debt advisory, David Martin, says many of the State’s biggest and best-known companies need the type of support promised to SMEs. The Government last week rolled out measures totalling €1 billion for small and medium-sized businesses.

The Sunday Independent said the Data Protection Commissioner has been liaising with European counterparts over concerns with the videoconferencing app Zoom. This follows a number of media reports regarding data breaches and moves by several governments to ban the use of Zoom by state agencies.

The Sunday Independent also said that Revenue may overlook rules regarding directors having to physically attend board meetings during the Covid-19 crisis. Normally, in situations where directors don’t attend meetings in person here they would lose out on the 12.5 per cent corporation tax rate and also risk paying more tax elsewhere.

1 Why gift a son now if it eats into his tax-free inheritance threshold?
2 Big Four told to outline plans for audit split in UK by October
3 ‘The rental situation stops me moving back home’
4 Brexit: System agreed for Irish goods to skip checks on UK trade
5 Flights abroad ban could last all summer
6 Can we finally say farewell to the scourge of hot-desking?
7 Dispute over €2.95m sale of Georgian property struck out
8 Chris Johns: Economic self-harm is the root of populism
9 Stocktake: Playing poker with the day traders
10 Five ways to create a culture of innovation in the workplace
Real news has value SUBSCRIBE