Cineworld closes all its cinemas due to coronavirus pandemic 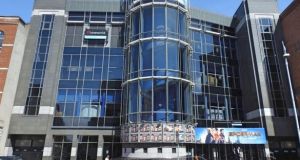 The company said it was monitoring the progress of its $1.65 billion takeover of Canadian rival Cineplex

Cinema chain Cineworld has shut all its 787 cinemas across 10 countries, including the Republic of Ireland, due to the coronavirus pandemic. The group is in talks with its lenders for ongoing liquidity requirements.

Cineworld, the world’s second-largest cinema operator, said it has suspended dividend payment for the fourth-quarter as well as upcoming 2020 quarterly dividends and that it is also in talks with its landlords, film studios and suppliers to mitigate the impact of the closures.

United States, the company’s biggest market with more than 500 cinemas where it generates three quarters of its revenue, has by far seen the most confirmed virus cases at more than 355,000, with deaths exceeding 10,000.

The company said it was monitoring the progress of its $1.65 billion (€1.5 billion) takeover of Canadian rival Cineplex, a deal that had led Cineworld to take on additional financing of about $2.2 billion, triggering concerns about its debt pile.

Cineworld said last month it could fail to meet its debt commitments in a worst-case coronavirus scenario where its cinemas would be shut for up to three months. Its debt stands at $3.5 billion, excluding leases and the additional financing of Cineplex.

Its combined credit score, which measures how likely a company is to default in the next year on a scale of 100 (very unlikely) to 1 (highly likely), was 1, Refinitiv Eikon data showed.

“We welcome the emergency support programmes to protect jobs and business that have been announced in our markets and will access them as appropriate,” Cineworld said, adding that the closures were “impossible to imagine a few months ago.”

1 Michael Smurfit: ‘I asked Trump to invite me to the White House for my 80th birthday’
2 Small businesses are cannon fodder in zealous anti-virus experiment
3 Ryanair expects air fares to fall when flights take off again
4 ‘I’m so lucky to be in the Caribbean – a million miles from Derry Girls’
5 Household savings soar as consumers stop spending
6 ‘The recovery needs to be a full-scale economic renewal’
7 Irish business of Carluccio’s restaurants to be wound up
8 Ireland stands to benefit in a big way from investing in public transport
9 ‘Never mind GDP; the most fundamental job of any leader is to keep his people alive’
10 Joint accounts: if one of us dies, can the other access the money?
Real news has value SUBSCRIBE