Advertising to plummet 30% this year in ‘shock’ to Irish industry, warns Core 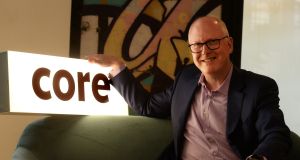 The Irish advertising market will collapse by about 30 per cent this year, marketing group Core has warned.

The contraction, which equates to more than €300 million in lost revenues, will pose severe difficulties for all media outlets and a “very significant shock” for the agencies that create, plan and buy advertising campaigns.

Before the coronavirus crisis took hold, Core had forecast “sluggish” growth of 1.6 per cent in advertising revenues in the Republic, but the “entirely new reality” of campaign cancellations and deferments means there will be a serious downturn in spending by advertisers throughout the year.

“We are now expecting the market to be down by about 30 per cent on average for the full year,” said Core chief executive Alan Cox.

“The low point will be in May and June, when we expect to see a 65 per cent falloff in activity compared to the same months last year.”

In the second half of 2020, the year-on-year decline rate is expected be “less dramatic, but still substantial”, with the market running 40 per cent lower in July and August and then about 20 per cent lower in the final four months.

Core, which employs 320 people and is the largest marketing group in Ireland, has implemented pay cuts ranging from 7.5 per cent to 20 per cent, with the reductions tiered based on salary level.

The cuts, which will be reviewed on an ongoing basis, were based on the reduction in demand that Core is now seeing and expects to record in the coming months.

“We would like to thank our employees for their amazing spirit and for their commitment to each other and their clients during this unsettling time,” Mr Cox said. No redundancies are planned at this point.

Core hopes advertisers will continue to invest in longer-term brand-building campaigns through the crisis.

“It is really important that marketers don’t go dark at a time like this, as it will impede their ability to reboot,” said Mr Cox.

However, brands that do carry on advertising will have to review their messages so they don’t jar with consumers, while in some sectors, notably travel, it “makes no sense” for advertisers to run big campaigns at the moment.

For media companies that depend on advertising revenues, this is an “exceptionally tough time”, Mr Cox added.

The plunge in footfall and traffic means out-of-home advertising, which had initially been forecast to grow 3.2 per cent this year, has been “heavily hit”, while the closure of cinemas means cinema advertising will have “existential” difficulties. Despite a surge in audiences for trusted news media, this sector will also be “particularly hard hit”.

While there may be a sharper return to activity in the fourth quarter than currently anticipated, it is not possible at this stage to rely on this happening, with much depending on how long it takes the economy to emerge from recession.

An online survey by Core Research of 1,000 adults, conducted between March 27th and 30th, found that 74 per cent were “very” or “extremely” concerned about Covid-19, but 67 per cent were optimistic that Ireland could overcome the outbreak.

Mr Cox said he would include himself among the 67 per cent: “I do feel optimistic that this will pass and we will be able to recover from it, with the help of the Irish Government and governments around the world.”