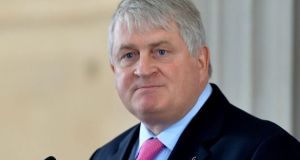 The Denis O’Brien-controlled company Communicorp operates the nationwide stations Newstalk and Today FM, along with a number of regional stations. Photograph: David Sleator

The Broadcasting Authority of Ireland (BAI) is to seek clarification from Denis O’Brien’s Communicorp radio group following its decision to ban Irish Times journalists from its programmes.

Communicorp controls the Newstalk and Today FM national stations, along with 98FM in Dublin and the music stations Spin and Spin South West.

Communicorp chief executive Adrian Serle told staff on Thursday the ban had been imposed due to “vile comments” made by Irish Times columnist Fintan O’Toole in a column on September 12th during the controversy over opinions expressed by Newstalk presenter George Hook about rape and responsibility.

At a theatre event in Dublin on Thursday evening, Mr O’Brien told The Irish Times the column should not have been written or published. He said he understood the mood in Newstalk was one of anger and a stand had to be taken.

Asked if the ban was permanent, he said he did not know. “That’s a decision for other people. As I said, it was nothing to do with me.”

Labour leader Brendan Howlin wrote to the BAI on Friday asking it to consider whether Communicorp’s action was consistent with its statutory obligations as a licensed broadcaster. “I do not see how the ‘blacking’ of a particular source of news reporting and comment, on grounds not relevant to the merits of individual contributions or contributors, could be held to be compatible with those obligations,” he wrote.

“I also have in mind the clear and unavoidable fact that the media interests of Mr Denis O’Brien include both Communicorp and also Independent News and Media – which is in direct competition with The Irish Times.”

In a statement, the BAI said it did not have a role in the individual editorial decisions of broadcasters. “However, as the statement issued by Communicorp Group (as reported) relates to the group of services that it owns, the BAI will now write to Communicorp Group to clarify a number of matters in respect of editorial independence and the contractual commitments of individual services.”

It said the issue would also be considered at the next BAI meeting on October 19th.

The National Union of Journalists condemned the ban, saying there was no place for blacklisting in the media. “A polite note from the BAI will not be sufficient,” said the union’s Irish secretary, Seamus Dooley.

“The authority needs to investigate editorial procedures at the station to see who else may be the subject of official blacklisting for holding views which do not find favour with the company. The ban is damaging to the reputation of radio stations whose staff deserve the right to exercise independent editorial judgement.

“It is also entirely disproportionate and will punish the company’s own producers and journalists who wish to use Irish Times journalists as sources of comment and information.”

No Irish Times journalists featured on any Communicorp stations on Friday. Journalist and writer Paul Howard, who had been scheduled to appear on Spin to discuss his latest Ross O’Carroll-Kelly show, was told Friday morning the interview had been cancelled due to the ban.

“All of the people I know who work in Marconi House are deeply embarrassed by this business,” Mr Howard tweeted.

Sarah Carey, whose contract as a presenter with Newstalk was terminated abruptly in August, said it was now incumbent on senior broadcasters at Communicorp to make their positions clear on the ban.

“I think it’s up to Pat Kenny, Shane Coleman and Matt Cooper to say whether they are going to accept interference in their editorial prerogative,” she said.

Chris Johns: Past is another country when it comes to our post-pandemic future 12:11
Brexit, coronavirus and bark beetle pose challenges for Coillte 30 May
Lioncor gets planning permission for ‘house of Europe’ project 30 May
Tobacco makers still trying to make a mint from Irish menthol market 30 May
Minister calls on EU to act against tobacco firms ‘undermining’ menthol ban in Ireland 30 May
Search executive
jobs on irishtimes.com