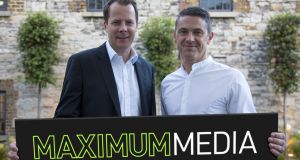 Daragh Byrne has been appointed new group chief executive of Maximum Media, the company behind the JOE, SportsJOE, Her and HerFamily brands, following Katie Molony’s decision to resign.

Mr Byrne joined Maximum as chief commercial officer in January, having previously served as commercial director of UTV Ireland. He has worked in the advertising industry for more than 15 years and was formerly group director of sales for TV3 Group.

He will oversee both Maximum Media in Ireland and JOE Media in the UK, where SportsJOE has gained audience traction, particularly among football fans.

John Burns, who was chief executive of Dublin radio station 98FM until its owner Communicorp stood down the role earlier this year, has joined Maximum as its managing director in Ireland.

Ms Molony has decided to move on from the Maximum Media/JOE Media group from November 24th after almost four years with the company, which was founded by its majority shareholder Niall McGarry.

“This has been a very tough decision, I am incredibly proud of my contribution to the business,” Ms Molony said.

“Working with Niall and the brilliant teams across Ireland and the UK has been so rewarding. I have no doubt the business will continue to grow from strength to strength with the new management team in place.”

Mr McGarry said Ms Molony had helped the business enormously over the past four years, during which time it has set about reinventing itself from a website publisher into a digital broadcaster with a series of Facebook Live video shows and podcasts.