Newstalk presenter who criticised station is taken off air 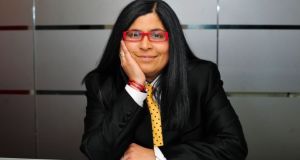 Dil Wickremasinghe: ‘I am shocked and deeply disappointed at this sudden news.’ Photograph: Aidan Crawley

A Newstalk presenter who last month criticised the station’s approach towards women broadcasters has expressed her “shock” and disappointment at being dropped by the station.

Dil Wickremasinghe said in a statement on Thursday: “Earlier today I met with Newstalk management who told me that despite positive ratings and performance, my Saturday night radio show Global Village has been cancelled. I am shocked and deeply disappointed at this sudden news”.

She added: “As someone who has first-hand experience of what it feels like to be on the outside looking in I will continue my work as a journalist and advocate for those on the margins of our society.”

Wickremasinghe had issued a statement on September 14th last, saying she would not present Global Village the following Saturday in protest at the way the station handled the controversy over comments on rape by Newstalk presenter George Hook. However, she said she hoped the station’s investigation into the case would conclude to allow her return to the show the following week.

Wickremasinghe then said she had been “deeply unsatisfied” with the unsupportive approach of Newstalk management to female presenters.

“It is common knowledge that insufficient effort has been made over the years to address the lack of female representation during prime time,” she wrote.

“As a result, female presenters are segregated to the weekend schedule. I believe this culture is connected to George Hook’s comments.”

Newstalk subsequently announced that Hook was to permanently “step down” from his weekday lunchtime slot, and would return to the airwaves in December, when he will begin presenting a new weekend show.

In her statement on Thursday, Wickremasinghe said: “10 years ago, I set out to create a unique radio show which served as a platform to highlight the voices of the most vulnerable in our society and the issues that affect their lives - issues that I personally care passionately about...

“I am grateful to the Newstalk team as they believed in me and gave me an opportunity to highlight the issues that mattered to me. Over the years Global Village survived numerous scheduling changes and cut backs and on two occasions I personally sourced sponsors to ensure the future of the programme,” she continued.

“My heartfelt thanks to all who have journeyed with me over the years and I look forward to connecting with you all again as I continue my work through different channels for change.”