TV industry still thrilled to make it through to next week

From ‘Ireland’s Got Talent’ to ‘The Apprentice’, elimination formats are going nowhere 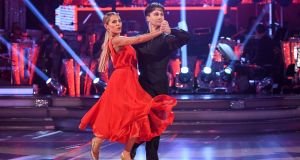 It’s October, the days are shortening and the television people are getting serious about entertainment again: Strictly Come Dancing has waltzed back into my life, I’m on the cusp of submitting to the 187th run of The Apprentice and last weekend saw the genuinely inspiring finale of one of the best things on TV this year, Astronauts: Do You Have What it Takes?

These three BBC programmes, featuring the mixed-ability skills of heat-seeking celebrities, would-be “founders” and the kind of superhumans who stand a chance of being recruited by Nasa, are all quite different, but each one adheres to the industry’s much-cherished elimination format. Every week, at least one participant gets booted out of the process.

It doesn’t matter if that process is dancing a quickstep to Last Nite by the Strokes, selling someone else’s granny to avoid the bitter recriminations of the “losers’ cafe” or coping with tests where Chris Hadfield turns off your oxygen supply (Astronauts was on fire). The principle is the same: people who want to win at life are prepared to risk failing in public along the way.

So in the new year, RTÉ will shimmy into the second series of Dancing with the Stars, while TV3 will unleash the first outing for Ireland’s Got Talent. Both are elimination formats with public votes, the key difference between the two being that DWTS is technically a celebrity not a “civilian” affair, while Ireland’s Got Talent is an exercise in star discovery.

At TV3’s recent season launch event at the National Concert Hall, Ireland’s Got Talent was both the big reveal and worst kept secret. It is equally more of the Cowellite same and the kind of enterprise that TV3 Group couldn’t afford before Virgin Media came along and bought the broadcaster.

Ireland’s Got Talent represents a calculated roll of the dice for TV3 director of programming Bill Malone, not least because its run will coincide with TV3’s properly big play, the Six Nations rugby tournament. It is part of TV3’s “Super Bowl” approach, the hope being that the rugby will have a “halo effect” on the rest of its schedule, bringing in more viewers to key peak-time slots in an increasingly cut-throat television market where every cent of advertising counts.

But while the BBC and ITV wage bloody ratings war each week with the overlapping scheduling of Strictly and The X Factor, with ITV coming off the worse, there wasn’t a chance in television hell that TV3 would try to do the same.

As the DWTS two-hour fake tan-fest bids to distract viewers from their Sunday night fear, Ireland’s Got Talent will be safely installed on Saturday nights. From TV3’s perspective, it doesn’t make sense to invest in programming only to put it directly up against a rival with a bigger budget, more established audience loyalty and greater cross-promotion power.

Meanwhile, RTÉ’s budget for the first series of Dancing with the Stars, the international name for the Strictly format, was about a fifth of the BBC original, and yet it could still be characterised as a glitzy gamble for the broadcaster and for Adrian Lynch, the executive who made the call to do the show.

The former RTÉ One controller, recently appointed to the executive board-level role of director of audience, channels and marketing, needed DWTS to improve upon the ratings and audience share performance of its cheaper predecessor, The Voice of Ireland, or else there would have been murder on the Ardmore Film Factory dancefloor. Having managed this, the pressure is on for a repeat performance. Indeed, the show, which began contestant casting over the summer, will be hoping to build on its debut come 2018.

Elimination formats, which can apply to everything from shaky-cam “reality” series to shiny floor talent contests, are not new. They’re one of the few things from the 1990s we’ve got left. The accusations levied against broadcasters – that they get too fond, too quickly, of playing it safe, and run good ideas into the ground – are not without merit. And yet it is entirely logical for linear television channels, fighting valiantly for attention, to pursue these formats harder than ever.

Sky 1 is getting in on the act this Friday, launching Sing: Ultimate A Cappella, which sounds like a threat of some kind. The Cat Deeley-hosted show, the first of its ilk for Sky in quite a while, is liable to being drowned out by groans of “Oh no, not another singing competition”. But Sky, which calls these shows “competitive elimination whittles”, has been open and upfront about why it has commissioned it into close-harmony life: it’s the “talkability” factor writ large.

To get hashtagged to death on social media, the analytics prove that nothing on TV beats the shows that conclude in someone, or a bunch of people, being reduced to tears, while everyone else perfects their deep sighs of relief and sympathetic hugs.

As long as this holds true, and the flops can be glossed over, broadcasters are going to keep repeating the same tricks. The purest ambition will lie not in their commissioning choices, but behind the flashing eyes of the contestants who bravely / foolishly take part.